The human brain only has so much room. If, for example, I’m going to fondly remember Tess Boyer’s performance of “Human” on Season 6 of The Voice, then something from high-school trigonometry’s got to go. The personal storage space used for the lyrics to Shakira’s “Empire” (half of which, admittedly, are “and I’m like…”), meanwhile, means that it’ll probably take a text from my mom to remember my wedding anniversary this year. (#IAmTheWorst)

What I’m really trying to say, though, is that while modern science has yet to measure the effect of reality-competition obsession on our species*, I’ve got a pretty good inkling that it can cause CTRL+ALT+DEL-type situations. (*I’m making a huge assumption here that extraterrestrials have yet to discover TVLine.com)

PHOTOS | The Voice: 30 Best Performances of All Time

I mean, last night, after watching The Voice‘s Top 3 performance episode, I was convinced Josh Kaufman would (and should) inherit Tessanne Chin’s crown and sash. Fifteen minutes later, I’d convinced myself that Christina Grimmie’s Twitter army would prove unstoppable. By early morning, though, with the knowledge that all three of Jake Worthington’s Monday-night performances had cracked the Top 10 on the iTunes charts, I began to fret that perhaps I’d underestimated the humble country crooner.

(Side note: Thankfully, Carson Daly kicked off the show by noting that iTunes downloads were removed from the voting totals for the finale — due to an iTunes glitch on Monday night that made it difficult for fans to find and download Josh Kaufman’s “Set Fire to the Rain.” #FairnessPrevails)

My prognostication navigation clearly broken, I sat down for tonight’s Season 6 finale with a knot of worry in my gut, and a spirit of musical celebration in my heart. Heck, is there any reality show that would dare to pack so much good music into a 120-minute space?

In the spirit of stalling on the results for another moment, let’s hat-tip the five most memorable moments:

BEST PERFORMANCE THAT HAD NOTHING TO DO WITH THE VOICE
OneRepublic’s “Love Runs Out” | Yes, Josh Kaufman absolutely nailed this ditty last week, but Ryan Tedder & Co. — along with two backup singers who really need to audition for Season 7, plus a group of ferocious, tambourine-wielding dancers — convinced me I was listening to 2014’s Song of Summer. (And I’m not usually that big a OneRepublic fan!)

BEST ESTABLISHED ACT/CONTESTANT COLLABORATION
Ed Sheeran & Christina Grimmie: “All of the Stars” | Contained by a song with a delicate, acoustic structure, Christina’s delicate upper register was put to perfect use, while the English superstar (who also rocked it solo on “Sing”) proved a generous, harmonious partner.

BEST “BRING-BACK” PERFORMANCE
Josh Kaufman (with Sisaundra Lewis, Stevie Jo and T.J. Wilkins): Nico and Vinz’s “Am I Wrong” | I could’ve lived without the gyrating dancers, but this super current song choice was exactly the kind of song Sisaundra, Stevie Jo and T.J.’s coaches should’ve been assigning ’em all season. (Oh, what could’ve been.) There wasn’t a weak vocal link in the group, but Sisaundra’s diva strut and holleration pleased me most of all.

SECRET MVP
Tess Boyer | Team Shakira’s eliminated-too-soon diva carried the hit-or-miss female-contestant quintet on “Umbrella” and matched her pal Christina Grimmie on the latter’s “Bring-Back” rendition of Lorde’s “Team.” Could she wind up being the Jennifer Hudson of The Voice? Time — and access to stellar songwriters and producers — will tell.

SWEETEST MOMENT
Jake Worthington promptly promising his new Kia (each member of the Top 3 scored one) to his grandmother — the woman who’d kindly paid for the teenage finalist’s first vehicle.

With that, let’s get to what really matters…voting results!

Third Place
Christina Grimmie #IDidNotSeeThatComing (The good news for Christina, though, was Adam Levine saying at the top of the show that win or lose, he planned to sign her to his label. Gotta love how The Voice manages to kill the suspense — even in its season finale.)

Whoa. Maybe my power of prediction isn’t as damaged as I thought. As the confetti fell and the credits rolled, Josh declared himself overwhelmed, surprised, happy and relieved. Would’ve been nice if they’d let him sing one more time, though, no?

Your turn. How did you feel about the Season 6 finale? Take our polls below, then expand on your thoughts in the comments!
Follow @MichaelSlezakTV

The Voice: 30 Best Performances of All Time

If you like TVLine, you'll LOVE our email news alerts! Click here to subscribe.
The Voice Season 6 Finale Recap: Did the Right Artist Win? Plus: Top 5 Moments! [Updated] 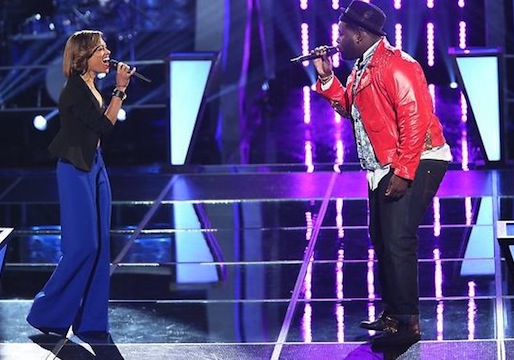