Clocking in at a mere 60 minutes, American Idol‘s Top 2 performance night was tighter than JLo’s calf muscles. And yet still, there was plenty of time for Keith Urban to throw subtle (and delicious) shade at a rival singing competition, for our friendly finalists to deliver six very good-to-excellent performances and for Randy Jackson to, um… cradle foam cut-outs of the contestants’ voting numbers? (Remind me: Where do I sign up for that seven-figure mentoring gig?)

Oh, sure, there were the usual annoyances: Extended shots of Jenny From the Block upsetting the flow of the actual performances (#ENOUGH — not a reference to her God-awful film of the same name); the promise that the Season 13 winner’s album would drop on August 13 (a nasty reminder of how badly Season 12 champ Candice Glover’s debut got mishandled last year); and the enduring presence of audience SwayBots.

Ultimately, though, this was one of the more satisfying Top 2 performance nights in recent memory. Sabotage did not come riding in on the back of a fanged beast (in the form of an inscrutable song pick by show creator Simon Fuller), tearing either contestant’s dreams to shreds. Yeah, Jena and Caleb’s reprises were a little too fresh in the memory to count as Major Moments, but they were both really good anyhow. (Still, what I wouldn’t have given to hear the self-penned tracks the duo had prepared for Top 4 night — ditties that were inexplicably replaced by “Travelin Band” and “Bad Romance” at the last possible second). And neither of the “winners’ singles” resembled the month-old hunk of bread served to Kris Allen and Adam Lambert in Season 8 (never forget “No Boundaries”) or contained turns of phrase such as David Cook’s “magic rainbow” or the Season 4 religious/sexual conundrum of “Inside Your Heaven.”

Jena’s track (co-written by Felicia Barton, who suffered a felony-level robbery by not getting a shot at the Season 8 Wild Card) proved more radio-ready and hook-laden than Caleb’s, but neither one will sink to “Flying Without Wings” depths on the Idol summer tour.

In other words, the Season 13 race is too close to call. I’ll go on the record and say that Jena will and should inherit Candice’s crown and sash, but I won’t be shocked if Caleb (who got slightly more enthusiastic feedback from the judges) ekes out the win. With that bit of prognostication in the books, let’s jump to letter grades for the night’s performances:

Round 1: Simon Fuller’s Pick
Jena Irene: “The Dog Days Are Over” — Grade: A- | Jena’s detractors frequently decry the teenage contestant’s mushy diction, but tonight they’ll have to find another gripe. Indeed, Jena crisply enunciated every single word of Florence + The Machine’s roaring anthem, all while working the stage and nailing her notes in a way that’s rare for reality show contestants attempting to climb Mt. Welch. The camera work, alas, didn’t match the excellence of the vocal — too many cutaways! too many panoramic angles! too many obstructions from the skirt-clad drum line! — but as long as Per Blankens is executive producer, we’ll have to learn to live with such distractions, I suppose.

Caleb Johnson: “Dream On” — Grade: B+ | I was going to complain about the massive amounts of helpful reverb Caleb received during his incredibly difficult (and quite well-executed) final third of this Aerosmith classic, but then Uncle Per went and cut to a closeup of gaping-mouthed J.Lo right in the middle of dude’s biggest glory note. (We’ll just call it a wash in terms of production help/hindrance — and be thankful there was no Danny Gokey-style horror-movie screaming.) All that aside, while Caleb definitely got the crowd fired up with his hair-shaking, mic-stand-swinging antics, I was glad Harry called him out for failing to bring the same intensity and connectedness to the song’s opening verse. The entire opening verse was peppered with flat notes, and Caleb’s face seemed to register the errors with a surprising show of nervousness. All three judges called Round 1 for Caleb, but I say “dream on.”

Round 2: Best Peformance Reprise
Jena Irene: “Can’t Help Falling in Love” — Grade: A | I’m gonna stick my neck out and say it: Jena’s version trumps The Voice‘s Christina Grimmie’s cover from Monday night — by a significant margin. The break in Jena’s voice on the opening “wise men say,” the subtle shifts in melody from Elvis’ original, the butterfly-wing delicacy of her delivery, all combined to make this the performance of the night — in spite of the fact that we’d heard her do it just two weeks prior. Keith’s remark about Jena being a “trailblazer” who’d inspired “somebody else to do it” was a hilarious bit of trash talk (without ever mentioning the dreaded ‘V’ word), but really, it was Jena — connecting so completely with a 52-year-old song — who brought the hammer down the hardest.

Caleb Johnson: “Maybe I’m Amazed” — Grade: A- | Like Jena, Caleb also chose to repeat a track he’d done just two weeks ago. And while he delivered in pretty much the same fashion as his first go-’round (and completely killed it with a falsetto flourish at the end) I didn’t disagree with Jennifer that the resident retro-rock dude could’ve infused the performance with a little more heart, and a little less of the “In the morning! In the evening! I wanna please you!” ad-libbing.  Still, while Keith, J.Lo and Harry all seemed slightly less enthused by the encore than Caleb’s first go-’round, Keith still wound up declaring Round 2 “a tie” (#hrmm) — while his fellow judges gave the edge to Jena.

Round 3: “Winner’s Single”
Jena Irene: “We Are One” — Grade: A | Anyone else notice Ryan Seacrest referring to Jena’s final performance as “her potential winner’s single” — while dropping the word “potential” from his description of Caleb’s final number? (#doublehrmm) Who knows? Maybe our intrepid host was just trying to balance out some inequities, considering Jena landed the second-most radio-ready single in Top 2 history (behind only Phillip Phillips’ “Home”) while Caleb got… well, at least it wasn’t “Flying Without Wings.” Seriously, though, the way Jena’s chipotle-infused howl gave soaring life to the earworm chorus of “We Are One,” the way she drove home a message about taking down one’s own armor and opening oneself up to connections, made me feel like I was listening to a movie-soundtrack anthem that could roll over the credits of a Hunger Games or Divergent sequel. I may or may not have shed a couple tears (or perhaps struggled with the effects of a high pollen count in Jersey City). Anyhow, if to a large degree, the purpose of Idol is to upend modern record labels’ terrible tendency to reward gimmicks over talent — to not care whether or not their acts can sing live — shouldn’t Jena’s hitmaking potential tip the Season 13 scales in her favor?

Caleb Johnson: “As Long as You Love Me” — Grade: B+ | OK, so it wasn’t like putting J.Lo in something from the Modern Amish Collection, but nevertheless, I’m not sure one can accuse “As Long As You Love Me” of being a perfect fit for “the Rock-n-Roll Viking” (Keith’s nickname for Caleb, not mine!). Perhaps Caeb wasn’t entirely sold on the song choice, either, as his usual outré performance style got tamped down with some modest mic-stand shaking and a couple of perfunctory strolls down toward the SwayBots. The slight hint of ennui — combined with a not-quite-ready-for-primetime chorus — made Jena the easy winner of Round 3, even if Caleb’s unsmiling post-performance face underscored that fact more clearly than the judges’ vague non-critiques.

What did you think of the Season 13 finale? What was your favorite performance? Who will win? Who should win? And what did you think of the “winners’ singles”? Take our polls below, then sound off in the comments! And follow me on Twitter @MichaelSlezakTV for all my Idol– and Voice-related news, exclusives, interviews and recaps.
Follow @MichaelSlezakTV 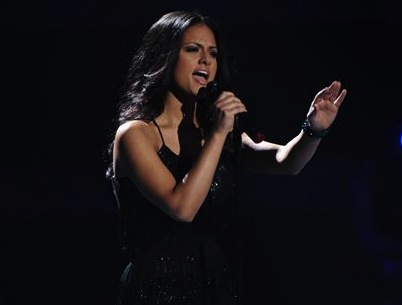