The introduction of two children plays a big role in this Sunday’s Once Upon a Time, as evidenced by this flurry of fresh photos from the episode “Kansas.”

In Season 3’s penultimate episode (if we’re counting finale night as a two-hour closer), Mary Margaret goes into labor, prompting friends and family to endeavor to ensure that Zelena doesn’t steal her newborn baby — and thus enact her time-travel plan, jeopardizing the very existence of several people. Meanwhile, in Oz flashbacks, Glinda tries to convince Zelena to fight her evil tendencies, but the appearance of a young girl from Kansas — that would be Dorothy, played by Matreya Scarrwener — could turn out to be her undoing.

How exactly do you think Miss Gale will affect Zelena’s fate? And is a little dog, too, pinned under the wreckage there somewhere?

If you like TVLine, you'll LOVE our email news alerts! Click here to subscribe.
Once Upon a Time Photos: The Charming Baby Arrives, Plus Zelena and Glinda Meet Dorothy 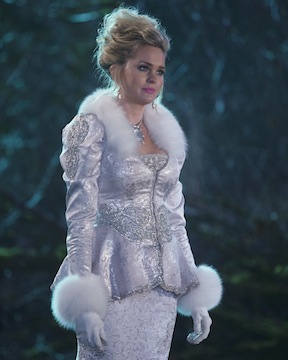