Rachel’s big Broadway debut finally arrived in Tuesday’s Glee, bringing several familiar faces along for the ride — including one determined to feed Rachel’s self-doubt until she collapsed under pressure.

Kurt called for an immediate halt to all things internet, transforming the loft into a “love bubble” where nothing could shatter Rachel’s fragile ego. Unfortunately, that bubble proved less-than-impenetrable when Tina arrived and word-vommitted all over her. An unlikely last resort, Santana returned — fresh off her lesbian world tour with Brittany — to rescue Rachel from her funk with a surprisingly touching speech. “You and I only have two speeds,” Santana told her, “Awesome or Not at All.”

Over in Lima… When her bosses at the news station discovered that she’d never actually been to New York City — despite her fervent trashing of the “rat-infested” dump — Sue convinced Will to give her his extra ticket. Though Will’s trip was cut short by a frantic phone call from Emma (her water broke!), Sue remained in the Big Apple, where she fell head over heels for a restauranteur named Mario.

Rachel ended up blowing the roof off the theater with her performance, and where does a Broadway star go to let off steam after making her mark on the Great White Way? Why, Blaine’s favorite little “spot” (read: gay club) in the West Village! All snark aside, it was really nice watching the gleeks partying together, genuinely loving life and forgetting about all the drama in their lives (of which there has been plenty this season).

Their celebrations continued the next morning when — after kicking Sue to the curb, literally, with a long-overdue speech — Rachel read the New York Times’ review of her show. Words like “talent” and “supernova” abounded, wiping away any of Rachel’s doubts about her future on Broadway.

This week’s episode was also full of heart-blasting Finn references, including Rachel saving a seat for the late, great Mr. Hudson on opening night, and Will giving his son(!) Daniel the middle name “Finn.” Overall, I’d say that — just as Rachel rediscovered herself in time for opening night — Glee has really found itself since shifting full-time to New York. Everything about this episode, from the writing to the emotions to the pay-offs, felt genuine.

What was your favorite song from this week’s Glee? Cast your vote below, browse pics from “Opening Night,” then drop a comment with your thoughts on the episode. 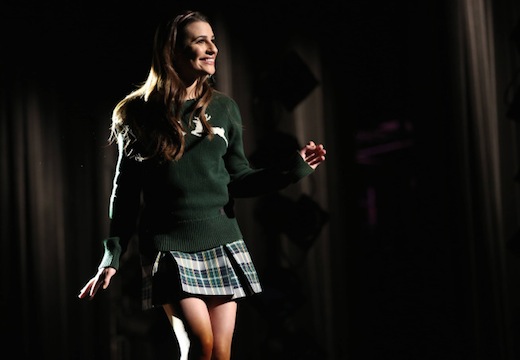