Glee is about to put the ‘Klaine’ in Shirley MacLaine!

Sorry, I just realized that sentence contained dangerous levels of corn, so allow me to make it up to you by sharing some sneak-peek photos of the Oscar-winning legend kicking off a multi-episode arc as a powerful New York socialite intent on turning recent Big Apple transplant Blaine into a superstar. (That news was first brought to you by TVLine, it’s worth mentioning.)

In all, we’ve got nine images from “Back-Up Plan” (April 29, 8/7c on Fox), featuring Blaine dueting with his boyfriend Kurt, catching the eye of MacLaine’s rich maven and winding up at a swanky luncheon we can only assume brings him to Manhattan’s Upper East Side. You’ll also see Mercedes attempting to get pal Santana in on a recording deal, as well as Rachel auditioning for… a TV pilot? (Could we be looking at a Los Angeles-set Season 6?)

If that’s not enough Glee goodness, I’ve also included five bonus images from Tuesday’s “Opening Night” installment, with Sue and Schue doing the song-and-dance thing with a yellow cab and a hot-dog cart in the background.

Click through the pics below, then sound off in the comments with your anticipation level for these various scenes! 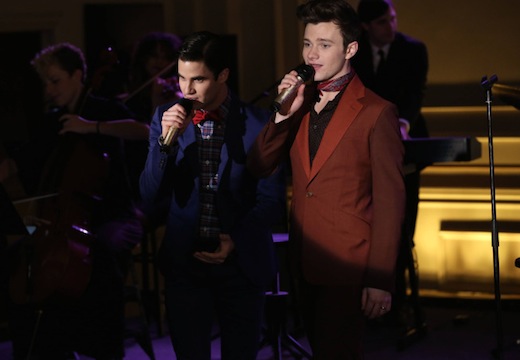