The hunt for Stefan’s last remaining doppelganger hit a slight snag in Thursday’s The Vampire Diaries, thanks largely to Caroline’s heart of gold — and perhaps her soft spot for a certain Salvatore.

Caroline was fully prepared to let kind-hearted Tom live happily ever after, but Enzo — for the first time in forever — served as the voice of reason, snapping poor Tommy Boy’s neck and leaving him for dead in a parking lot.

Operation: Murk Tom ended with Caroline and Stefan cuddling in a minivan, only to be interrupted by one of the most disturbing TVD moments in recent memory: the Travelers performed a mass suicide, sending dozens of them to the other side, allowing for the emergence of their leader Markos. And by “emergence,” I mean he literally walked out of Bonnie’s shadow, which looked very uncomfortable — even if it was also really, really cool.

WITCHES BE CRAZY | It turns out Luke and Liv are part of a group of witches that were determined to protect Tom from the Travelers, which is why I was pretty surprised when Liv tried to kill Elena, the last remaining female doppelganger. Fortunately, Jeremy stepped in with a Plan C, ensuring that his sister will live a long and happy afterlife.

DELENA DRAMA | The pre-existing awkwardness of Damon and Elena’s new relationship status was compounded by a super-uncomfortable meeting with Jeremy’s teacher. (Yes, Damon and Elena are considered Jer-Bear’s primary guardians, which explains every single one of his disciplinary problems.) So is it any wonder why Jeremy decided to exit Chez Salvatore and move in with Matt and Tyler? … In other news, how much is real estate in Mystic Falls? Because I’d love to live next door to that trio.

CAROLENZO | It’s official: The only person shipping Caroline and Enzo… is Enzo, himself. Damon’s long-time bestie spent much of the hour relentlessly creeping on Ms. Forbes, and it was not cute. There was a brief moment during Enzo’s pep talk about war and survival that had me thinking he might be a good match for Caroline, but then it became abundantly clear that Steroline is the new ship of choice. Not only did she get awfully flirty with Tom, but her pre-spooning chat with Stefan was also pretty adorable.

BAD NEWS FOR BEREMY | Speaking of ships, Bonnie and Jeremy could potentially be on the rocks. She expressed concern about Jeremy’s newfound “friendship” with Liv, and her fears were confirmed when Jeremy literally laid down his life for her during a confrontation with Damon. Normally, I’d say Jeremy is too noble to cheat on Bonnie, but I haven’t forgotten about that time he gave into his ghost lust with Anna. (In other news, I never thought I’d type out the phrase “ghost lust,” but there you have it.)

Vampire Diaries fans, what’s your take on this week’s mind-bending episode? Were you hoping for a Stefan-Caroline kiss? And can Liv and Luke really be trusted? Browse pics from the episode below, then drop a comment with your thoughts and theories: 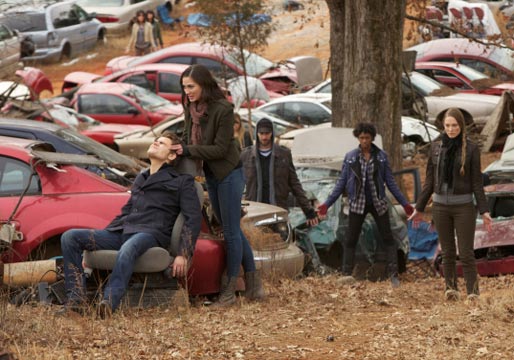