Step right up, Grimmsters: The creepy carnival has come to town.

Tonight’s episode (NBC, 9/8c) finds a Wesen spectacle putting down stakes in Portland, and it draws Nick and Hank’s attention after two murders are linked to the traveling show. Looks like it’s time for Monroe and Rosalie to go undercover!

“Our circus had a strong steampunk flavor, so I did lots of research into old-fashioned circus costumes, and current steampunk fashions,” series costume designer Alexandra Welker tells TVLine.

“I also designed and made all of the steampunk jewelry, with my team of able-bodied costumers,” she adds. “We had quite the assembly line set up in my office!”

Click through the exclusive gallery below to see Welker’s original wardrobe sketches — along with her notes on how the costumes came to be — and some shots from the episode, including one of guest star Sam Witwer (Being Human). 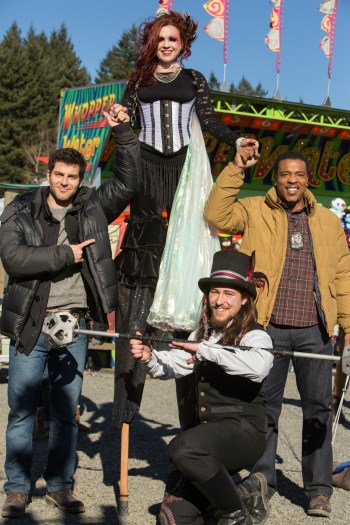