Can Reign‘s Lola ever catch a break? Her time at French Court has been a nightmare since day one, and now that she’s pregnant with Francis’ child, things are only going to get worse for everyone. (Well, almost everyone.)

TVLine spoke with Lola herself, Anna Popplewell, about her character’s complicated pregnancy, the impending “Darkness” at Court and how the baby could play a major role in the ongoing Mary-Francis-Bash love triangle.

TVLINE | It’s crazy how Lola suddenly went from just one of Mary’s ladies in waiting to this major problem for her marriage. What’ll happen there?
In the next few episodes, you’ll see Lola and Mary trying to avoid having Francis find out about the pregnancy, because the implications of that would either be her giving the child to Francis or possibly remaining at Court for the rest of her life.

TVLINE | Mary appeared to forgive Lola, but has she really?
I don’t think it’s something that Mary’s ever going to forget. It wasn’t a brilliant decision on Lola’s part, or Francis’s — it does take two to tango. But I understand where it came from. There was originally a speech in that episode where Lola talks to Francis about Colin, who was killed, and also the death of Aylee. These characters were really connecting out of sadness. Anyway, I don’t think Mary will forgive her, but I think she’ll come to understand how sorry Lola is about it and how little she wants to threaten their marriage.

TVLINE | Is this a secret that could drive a wedge between Mary and Francis?
Well, as long as Mary is keeping this secret, she’s going to be lying to her husband and Lola is going to be the cause of that. It’s not just Lola’s future at stake, but also Mary’s future with Francis. So, drama on all sides, really.

TVLINE | I’m sure Bash would love to get his hands on this information. Will he?
At the moment, Bash is less involved in that side of things, but as you said, any weakness between Mary and Francis is key for Bash because he’s still so in love with Mary. And it’s impossible for those feelings to ever be forgotten. But there’s something exciting that happens for Bash during the remaining episodes that will alter the balance of that situation.

TVLINE | Time is progressing so quickly. Could Lola have this baby by the end of Season 1?
It could be. There are definitely more time jumps between now and the end of the season, and we’ll be moving the plot along very rapidly.

TVLINE | And what’s this “Darkness” we keep hearing about? It’s spooky.
“The Darkness” is a threat to everyone in the castle, really. In addition to all the scheming in French Court, there’s also this overwhelming threat from outside. You’ll see that come to the front in the last few episodes of the season.

TVLINE | Lastly, any major deaths we should be bracing ourselves for?
It’s always a possibility, and there’s plenty of death at the castle. Life expectancy was not the same then as it is now, so people are really dropping like flies.

Do you think Lola’s pregnancy could break up Mary and Francis? And what’s “exciting” twist could be in store for Bash? Drop a comment with your thoughts and theories below. 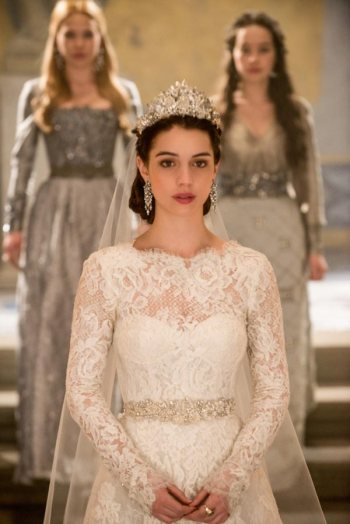