A group of strangers marooned in a strange place, some of them not who they present themselves to be. Oh, and there seems to be something hiding out there in the forest….

Now make the aforementioned group a CW-friendly assembly of youths, and you’ve got The 100, the network’s futuristic Lost-meets-Lord of the Flies drama premiering Wednesday at 9/8c.

Set almost a century after a nuclear apocalypse rendered Earth uninhabitable, The 100 follows the denizens of “The Ark,” an international space station composed of the survivors from 12 different countries. With resources at a premium, a hefty fine is paid for any infraction: death (by “floating” out an airlock), if you are an adult, or imprisonment for anyone under 18. As the series opens, 100 of the jailed juvenile delinquents are shuttled down to the Earth’s surface as lab rats, to see if the planet has become livable again.

Once on the ground, the motley crew of kiddies — ranging from Clarke Griffin (Eliza Taylor, Neighbours), the noble but plucky daughter of a do-right Ark engineer, to an almost bloodthirsty cadre of telegenic thugs — are immediately thrown into a debate about whether to seek out a bomb shelter loaded with supplies or run wild in the wild. Along the way, conflicting agendas are revealed, especially when it comes to letting the gr’ups on The Ark know that life is (seemingly?) good on the big blue marble.

The adults on The Ark, meanwhile, are fighting battles of their own, as the attempted murder of Chancellor Jaha (Grey’s Anatomy‘s Isaiah Washington) pits Clarke’s mother, the chief medical officer (Person of Interest‘s Paige Turco), against Jaha’s power-grabby No. 1 (Lost‘s Henry Ian Cusick) — who, to his credit, is willing to make the tough life-or-death calls.

“Lost is a good model for the way that they twisted and twisted and twisted expectations. I’m a huge fan of it and any similarities are intentional,” executive producer Jason Rothenberg tells TVLine. Similarly, he shares that he had long wanted to tell the Lord of the Flies story “writ large,” as “a colonial space mission to another planet” (though originally with a juvenile delinquent-free premise). So when the book proposal for what would become The 100 novel series (by Kass Morgan) landed on his desk, “It was like fate.”

Among The 100, Clarke “is clearly our hero on the ground,” Rothenberg says, while brooding Bellamy (Bob Morley, Neighbors) at first blush comes off as the villain, though once producers observed certain layers in the actor’s performance, “We thought it’d be an interesting idea to arc him into a different place.” As Clarke, Bellamy and their respective followers on Earth engage, enrage and on rare occasion find common ground, “The show becomes about how far you will go, how dark you can go, in order to survive… in order for humanity to survive.”

“The metaphor for this show is, on some level, Jamestown and Roanoke,” Rothenberg offers. “They’ve all landed in this wild place and they need to decide what kind of rules there are. ‘The youth have inherited the Earth,’ but that comes with responsibility. So are they going to let it be, ‘Do whatever the hell you want,’ which Bellamy preaches, or will they have rules and ways of punishment?”

Of course, the Roanoke colony didn’t have two-headed deer, monstrous fish in the lakes or phosphorescent forests. (Thanks, nuclear afterglow!) Rothenberg won’t elaborate on what other surprises, human or otherwise, await The 100, but teases, “We will continue to reveal the way the world has changed.”

Before you hang with The 100, peruse our guide to Who’s Who amongst the young and older.

If you like TVLine, you'll LOVE our email news alerts! Click here to subscribe.
The 100: Your Guide to Who's Who on The CW's Lost-Meets-Lord of the Flies Hybrid 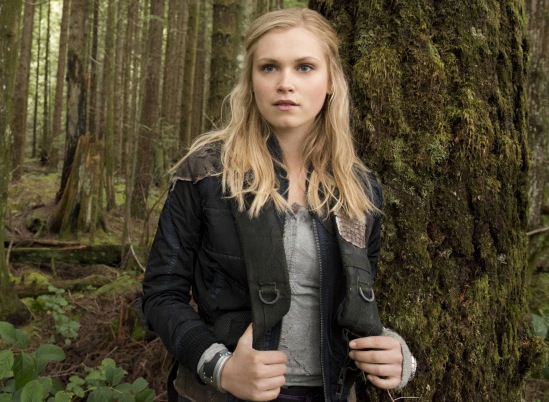