The next episode of ABC’s Castle — which (update) has been rescheduled for Monday, Feb. 3* — is less superficial than its glossy fashion magazine setting would suggest. In fact, it proves to be one of this season’s deeper dives into the Rick/Kate wedding arc.

I was dismissive of the most recent episode, which offered a toothless, forgettable riff on Miley Cyrus and her ilk. (Add in Nashville and Arrow, and all told it was a disappointing week for my DVR.) But “Dressed to Kill” puts all that in the past. ABC was smart to circulate it early.

RELATED | Castle Spoilers — Beckett Gets a Blast from Her Modelling Past!

Here’s a spoiler-free glimpse of what you can expect:

♦ You will learn precisely what it was that young Kate Beckett and her “unforgettable” cheekbones did, back in the day, to disappoint fashion mag maven Matilda King (played by Fisher). Hint: It involved Nicole Kidman.

♦ A significant portion of the episode is devoted to Rick and Kate’s search for a wedding venue — but their determination to zero in on one specific place, no matter what, may have unintended repercussions.

♦ So, the wedding dress Kate tries on (see brand-spanking-new photos below, or a big ol’ one here)…. Regardless of what you think of the gown itself, make no mistake, you will love this moment. But a word of warning: The scene grows far more complicated than perhaps anyone could predict. A really nice piece of acting by Stana Katic.

♦  If the above moment doesn’t wet your eyes, a later reference to Johanna Beckett surely will.

♦ “Caskett” fans will on at least one occasion audibly utter, “Oh, no….”

♦ I know, Castle at times operates on a premise of selective amnesia. But the Prada aping — Matilda lobs her coat at her assistant and drops famous folks’ first names — makes it conspicuous that pop culture reference-ready Rick never draws a direct comparison.

♦ Sorry, Esplanie fans: Although there’s no Tory this week, Espo is more than happy to call in one of Matilda’s mannequins for questioning.

* Note: The airdate change (originally Jan. 27) was announced after this story was published, and is, I reckon, to land the episode during February sweeps (which begins Thursday, Jan. 30). This Monday, “Number One Fan” will encore instead. (“Valkyrie” repeats on Feb. 10, and “Smells Like Teen Spirit” airs the 17th.)

If you like TVLine, you'll LOVE our email news alerts! Click here to subscribe.
Review: Castle's Feb. 3 Riff on Devil Wears Prada Is More Than Skin Deep -- Plus: Dress Photos 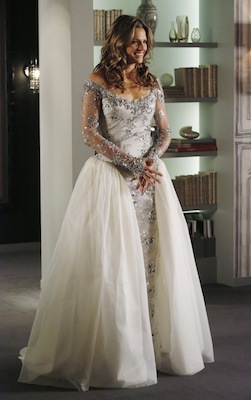