The 2014 Golden Globes telecast certainly served up its fair share of surprises — heck, we’re pretty sure Jacqueline Bisset’s gonna think her friends are pulling her leg when she checks her voice mail messages Monday morning — but everyone knows that winners and losers extend beyond what went down at the podium.

And thus, while we sit here grumbling over Tatiana Maslany’s admission to the “It’s an Honor Just to Be Nominated” Club and wondering whether all those fashion-oriented sites will recognize Sandra Bullock’s gown authoritaaay, we must also take stock of which folks managed to score victories in the court of water-cooler opinion Sunday night.

In fact, without further ado, let’s rewind and enjoy the funniest, craziest and most unexpected moments at the 2014 Globes — from Julia Louis-Dreyfus’ surprise snack to Aaron Paul’s profane shout to Jennifer Lawrence’s (standard operating) charmingness.

Click through our picks below, then hit the comments and tell us if you agree with our take on this year’s show. And for all of TVLine’s post-Globes interviews, galleries, and other insider intel, do follow us on Twitter @TVLine! 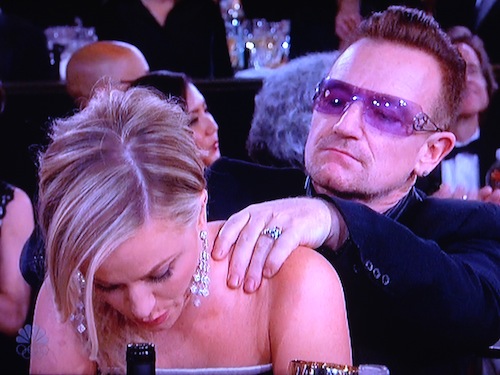