TVLine caught up with stars Bitsie Tulloch and Claire Coffee, who gave us the lowdown on what to expect from the supernatural series’ third season premiere (Friday at 9/8c on NBC).

Topics covered include Juliette & Co.’s race against the lurching, rage-filled, zombified clock; a series of grotesque tasks that earn Adalind her Grimm Scouts Gore Badge; Tulloch’s extracurricular American history assignment; and how something Nick does while under the undead influence “affects everyone.”

Read on for more fairy-tale details about the first half of the two-part season opener, then click through the gallery for some exclusive behind-the-scenes –- but definitely not mealtime-appropriate — shots from the episode.

TVLINE | Where do we pick up with Juliette as the premiere begins?
Juliette was kind of feeling like she got Nick back, and then she loses him again when there’s this sort of zombie invasion. She’s toughened up really, really quick; she’s just like, “I’ll be damned if I’m going to lose him again. I just got him back, I just started remembering him.” [She and the gang] are pretty much dead-set on figuring out a way to rescue Nick before he either dies or turns into a zombie and it’s irreversible.

[The episode] directly picks up where the finale ended. At first, it’s Monroe and Rosalie and Juliette trying to run around the container yard and see if they can figure out what happened to him. It’s definitely high drama, it feels a little more like a movie. The first two [episodes], there’s a lot going on. We had more stunt doubles then we’d ever had, there were a lot of background zombies and the story’s just really cool… The premiere is going to have a little cliffhanger going into Episode 2, because [the gang is] running out of time.

TVLINE | Executive producers David Greenwalt and James Kouf have said that when Nick is a zombie, and he’s full of rage, he does something that he’s going to regret when he comes out of it. What does Nick and Juliette’s relationship look like after all of that?
What he did affects everyone, sort of, directly and indirectly. Obviously I can’t say what that is… They’ve spent two seasons going through a lot, and no matter what they’ve gone through, they always find their way back to each other… Of course the relationship is going to be altered a little bit because it’s the first time he can talk openly about this world where she’s actually going to believe him, and because they’re going through this together. And Juliette is going to be of service — you know, she’s a veterinarian, and she’s going to be way more proactive than she was before.

TVLINE | As the season moves forward, does Juliette have a certain role on the team?
Juliette is the scientist and the doctor. She’s the one who has an actual true medical background, so that’s what she’s bringing to the table, as well as just the fact that she’s known him longer… There’s also something to be said for that fact that Juliette’s the only character that’s not a cop or a detective and not a Wesen. She’s just a real human, so that’s bringing something to the table, too.

TVLINE | I’ve always wanted a Juliette-and-Rosalie bonding scene, and I felt like maybe they weren’t as close because Rosalie was part of this world that Juliette wasn’t part of. Will there be girl time time in the coming episodes?
There’s girl time, they’re friends. Any of the distance up to this point, as you said, has just been because Rosalie didn’t feel like she could be herself around Juliette.

TVLINE | Let’s talk about your new movie Parkland, which is the story of President John F. Kennedy’s assassination told through not-so-well-known people.
I really responded to [my] character, Marilyn Sitzman, who was very important in her own way to the story because she was Abraham Zapruder’s secretary. Zapruder [played by Paul Giamatti] had shown up to work that day without his camera, and Marilyn insisted that he go home and get it. If she hadn’t done that, we wouldn’t have this incredibly important footage… What’s so cool about it is that it’s a movie about the JFK assassination, but it’s not about JFK or Jackie [Kennedy] or Lee Harvey Oswald, it’s about all the secondary characters who became so important because of their involvement. TVLINE | Let’s talk about Adalind: As we come into the episode, we know she’s working with Stephania, she’s basically thrown over Frau Pech, and the things she has to do in these first couple episodes are truly disgusting.
Yes, it’s really gnarly, even to describe. Our special effects makeup team, run by Barney [Burman], they made an entire Frau Pech body, and so, yeah, it’s disemboweled, it’s chopped up. Her body is made into a stew, for lack of a better word… We’re using the whole Frau Pech in order to make my body prepared to get these powers back…  I’m selling the baby to Stephania in order to get her knowledge and learn what to do to get those powers back.

TVLINE | That was the price, right?
Yes, it’s a threefold evil pact.

TVLINE | As far as you guys have shot, does Adalind know who the father of her baby is?
No. Still up in the air.

TVLINE | Adalind seems very happy with the deal she’s made to trade her baby for her powers. Do you think there’s any chance that her feelings for the child could change between now and when the actual exchange has to happen?
Yeah, it’s possible now. It wouldn’t have been, had she still had her Hexenbiest powers, because they really shielded her from any sort of normal human emotion or response. But now that she is a human being, just like anybody else, I would think it seems like the mothering instinct is the most formidable of all. I would think that that would certainly affect her in some way.

Click through the gallery below to get a gruesome glimpse of Adalind’s terrible tasks. (Spoiler Alert: These pics are from the Season 3 premiere, so if you don’t want a sneak peek, be gone!.) 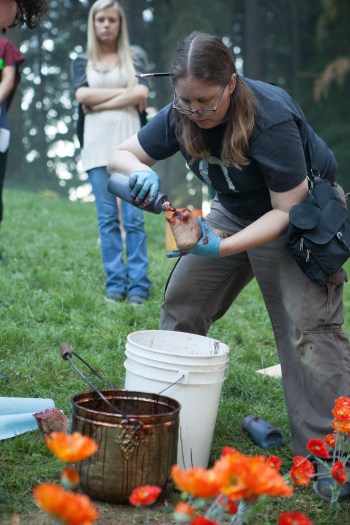