The femmes are fierce in Arrow Season 2 (premiering Wednesday at 8/7c) — and we’ve got photographic evidence.

As previously reported, Oliver’s ex Laurel Lance (played by Katie Cassidy) — blaming the metaphorical “crossfire between two archers” for Tommy’s tragic death — has made it her mission “to bring down the Arrow” aka the last archer standing, says showrunner Andrew Kreisberg. And from the look of one sequence below, she has her prey in sight when she summons a cavalry.

RELATED | Arrow Season 2: [Spoiler] Is Back — With a Vengeance? And More Casting News

Also in these photos from Episode 3: Escaped convict Barton Mathis (guest star Michael Eklund) grabs Felicity, and Roy crosses paths with a plucky gal dubbed Sin (The Killing‘s Bex Taylor-Klaus). “If the Arrow has Roy [as a potential sidekick], then Black Canary (to be played by Caity Lotz) has Sin,” is how Kreisberg described the new character during TVLine’s fall preview Q&A.

Casting Taylor-Klaus was a win for Kreisberg, who says that he and his wife were huge fans of the starlet’s work as The Killing‘s Bullet. “Truth be told, we were thinking of killing off [Sin] quickly,” he shared. “But now that we have Bex, we’re keeping her around.” 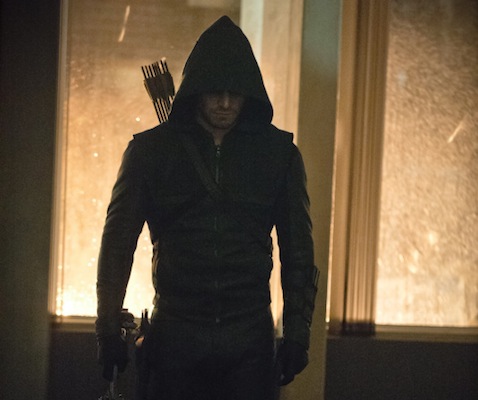