Tonight’s installment of So You Think You Can Dance started off with a sad trombone and a swift punch to the gut. It was the feel-bad intro of the summer TV season, a Game of Thrones‘ “Red Wedding” to start the festivities, rather than end them.

Okay, okay, I’m exaggerating a little bit, but that doesn’t mean I’m not perturbed by Nigel Lythgoe’s decision to begin each Season 10 telecast by sending two dancers to the guillotine — then asking them to glue their heads back on, return to the stage later in the episode and dance with their partners as if nothing untoward had happened at all. It’s a move that potentially puts the eliminated contestant’s partner at risk — what if the evictee phones it in, or can’t recover from the bad news in time to truly brrrring it? — and also means the judges can’t take into account whether one of the Bottom 6 hoofers is about to deliver something so extraordinary that his or her ouster would result in 9-1-1 calls reporting felony robberies.

Speaking of results, let’s get ’em out of the way before we rank this week’s dances.

SENT IMMEDIATELY TO SAFETY BY THE JUDGES
Makenzie
Alan (hallelujah!)

DANCED FOR THEIR LIVES
Mariah: A rather uninspired bit of krumping to Waka Flocka Flame
Brittany: A slightly less uninspired piece of solo ballroom work that proved she knows how to ride the beat
Jade: A routine that was like the “exorcism” dude from auditions, but not as moving
Carlos: A pretty solid contemporary piece with very athletic floorwork

Of the Bottom 4, I’d have cut Mariah and Carlos, but come on now. Nico and Alexis didn’t even land in the Bottom 3 after their ultra unsuccessful “hip-hop” from last week? Hinky voting already? Feh!

But I can’t be too, too cantankerous — not when most members of the Season 10 Top 20 delivered thoroughly entertaining performances (a number of which registered very high on the degree-of-difficulty scale).

So let’s hop to it and break down the highs and lows of the show — in kicky gallery form!

And with that, let me turn things over to you. What did you think of this week’s SYTYCD? Who was best in show? Who will and should be at risk? Take our poll below, then sound off in the comments, and for all my reality-related news, recaps, interviews and videos, follow me on Twitter @MichaelSlezakTV! 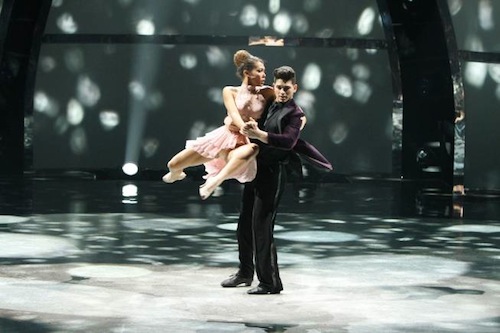