As Game of Thrones likes to remind us, winter is coming – and now a new batch of Season 3 photos gives us a glimpse of what the approaching storm is going to look like.

The next installment of the HBO drama begins on March 31, but all you direwolves out there can pounce on these advance photos in the meantime. You’ll see several familiar faces — including Peter Dinklage‘s Tyrion, Lena Headley‘s Cersei,  Emilia Clarke’s Daenerys, Carice van Houten’s Red Priestess Melisandre and Maisie Williams’ Arya – as well as new players like Diana Rigg (The Avengers) as the shrewd Olenna Tyrell, Thomas Brodie Sangster (Love Actually) as the greensight-blessed Jojen Reed and Ciaran Hinds (Rome) as “King Beyond the Wall” Mance Rayder.

Click through the gallery below (and re-watch the video at the bottom of the post to help you keep everyone straight) and then hit the comments: What are you most looking forward to about Game of Thrones‘ return?

If you like TVLine, you'll LOVE our weekly newsletter. Click here to subscribe.
Game of Thrones First Look: Starks, Lannisters, a Greenseer, a Red Priestess and Many More 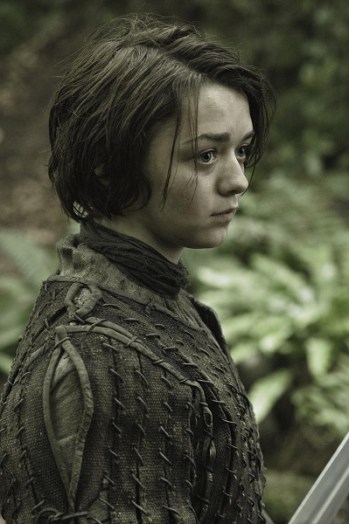