If you have yet to watch Monday’s How I Met Your Mother, avert your eyes now. Everyone else, you may proceed…

Monday night’s special holiday episode of How I Met Your Mother gave viewers quite a gift: Barney and Robin got engaged!

RELATED | TVLine’s Holiday Gift Guide: Treat Friends to How I Met Your Mother Merri – Wait for It – Ment

Leave it to Barney to propose to his ex via an incredibly elaborate plan. Perhaps knowing that a ring in her Scotch just won’t do, Barney enlists Robin’s work nemesis Patrice in his scheme by pretending to date her and spilling to Ted that he’s planning to ask her to marry him. In actuality, she helps Barney orchestrate the romantic moment in which he pops the question to Robin.

But first, let’s rewind to the beginning of the hour, which finds Barney jinxing Ted into silence as he announces his intentions. Barney makes his pal promise that he won’t try to talk him out of it and that he won’t tell anyone. Ted agrees to the terms, but knows he should tell Robin. However, he ends up asking her to be his date to the unveiling of the GNB tower instead and spills Barney’s secret to… Marshall.

“What is wrong with me?” Ted exclaims. “Deep down, is there still some crazy part of me that thinks I’m going to wind up with Robin? Am I that deluded? If so, I need to grow up.”

He continues: “Robin deserves the chance to go after Barney one last time if that’s what she wants.”

But Marshall believes Ted and Robin could still end up together, so he tries to convince Ted to keep mum and be selfish for once.

In the limo on the way to the GNB event, Ted reveals the truth about Barney’s plans to Robin. She insists she’s not in love with him and instructs Ranjit to proceed as planned. But Ted can’t be selfish and has the limo brought to the World Wide News building, where Barney plans to propose on the rooftop — aka Robin’s favorite place.

“I can’t keep making an ass of myself,” protests Robin. Ted, an expert in the field, sweetly encourages her to “get the hell out of this car” because making an ass of himself while trying to get her led to a beautiful friendship.

When Robin arrives on the rooftop, she finds a piece of paper titled The Robin on the floor. The step-by-step play guide chronicles everything Barney has done the past few months — including not-so-fake confessing his feelings in front of her boyfriend, trying to kiss her and fake-dating Patrice — and reveals them as points in his master plan to win back Robin. Among the final steps: Burning The Playbook because “you don’t need it anymore” (feel free to aww) and waiting to see if Ted will tell Robin about the proposal. If he does, it means he’s “let go of Robin and has given you his blessing” (aww, part two). (And please, let it be the truth so we can put the Ted/Robin thing to rest.)

As for Robin’s answer, the writing’s been on the wall since last season’s finale flash forward revealed that the two get hitched a little ways down the road. Even though Robin initially feels manipulated by Barney’s master “lie,” her feelings shift when she sees the final step in his The Robin play: “Hope she says yes.” And she does.

HIMYM fans, what did you think of the long-awaited moment (captured in the photos below)? Did Ted earn some points in your book for doing the mature thing? And did you like the Buffy reunion between Seth Green and Alyson Hannigan?

If you like TVLine, you'll LOVE our weekly newsletter. Click here to subscribe.
How I Met Your Mother Recap: Barney Rings in the Holidays -- Now Updated With Photos 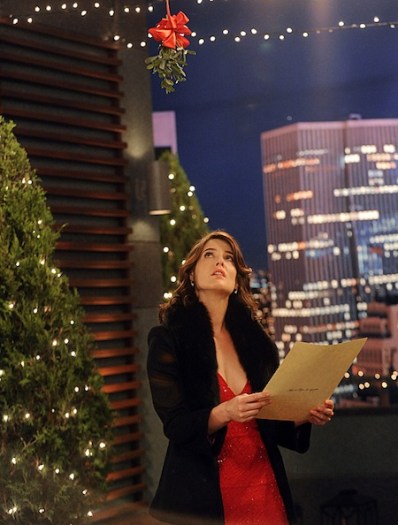