Abracadabra! Just like that, ABC has dropped 23 pics from the Season 2 premiere of Once Upon a Time (airing Sept. 30) in our cyberlap. While they mostly revolve around a mob scene (pitchforks not included), they conjure up new questions. Namely:

* Who is Dr. Whale (played by David Anders) really? Because while the promo had us thinking he was a friendly to the Evil Queen, now… not so much.

* Is Snow White/Mary Margaret defending the Evil Queen/Regina there on her porch?

PHOTO | Exclusive Once Upon a Time First Look: The Season 2 Poster Is Ssssmokin’!

* Looks like Regina’s first attempt to work some hocus pocus on the storming villagers comes up empty. How funny will that moment be?

* Do you think the miscellaneous background players went into the scene with their own little unofficial origin story in their heads, about who they really are? “Oh, I’m Rapunzel!” “I’m Sebastian the Crab! I shall look crabby!”

* Are the Charmings moving in together? How awesome are the pics of David with “grandson” Henry?

* Does anyone give the stink eye better than Grumpy/Leroy?

* Will I be typing “Fairytale Land Name/Storybrooke Name” all season long? Or can we agree on a shorthand?

If you like TVLine, you'll LOVE our email news alerts! Click here to subscribe.
Once Upon a Time Sneak Peek: 23 Premiere Photos Conjure Up Many New Questions 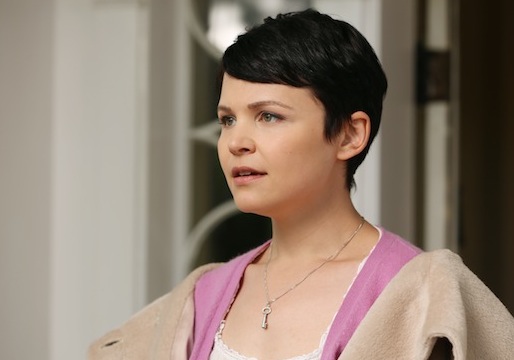