ABC’s Revenge capped its addictive freshman run Wednesday night with more questions than answers and more twisty turns than resolution — and we wouldn’t have had it any other way!

But with so many mysteries left floating around the Revenge-verse — for example: is Emily’s mom actually still alive? Did Victoria go down with that plane? And will Declan continue to rock that Boston-tinged accent? (Kidding!) — we couldn’t just venture into hiatusville without grilling showrunner Mike Kelley for some scoop.

Here, the EP does his best to answer all of our burning Qs, and previews what’s ahead in Season 2 (debuting this fall in its plum new Sunday night timeslot).

TVLINE | Congrats on an awesome finale! Were you feeling the pressure to make it extra-good given the quality of the season as a whole?
I was feeling really good about it. I felt like we delivered an episode that honored what we had been doing all season — which felt like a speeding train and we just needed to answer a lot of questions and set up some more to give ourselves some story engines for next year. It was very emotional and action-packed — and we delivered on our promise.

TVLINE | There had been talk from you and some of the cast about a couple of deaths at the end of the season, and yet no one seemed to die in the finale. Who were you all referring to?
I’ll tell you that there was a death, for sure. There are at least three people in jeopardy, and one that you didn’t know about. There is definitely a major death that occurred last night. You’ll know in the first episode [of Season 2] who is gone and why.

TVLINE | Is it someone we know well and will miss?
Yes, it’s an important death. At least one of the characters will have died, and it’s going to be difficult for fans to [accept].

TVLINE | Given the manner in which this finale ended — and this death you speak of — is it safe to assume you’re going to pick up in the premiere right where you left off?
You can rest assured that we will answer all of the questions that we posed to your satisfaction. We’ll be back in the Hamptons in the summer very quickly, because that’s a fun place to be. We’re going to open up next season with another flash forward to a big summer event, like the Fire & Ice Ball [in Season 1] — and also some pretty dark twists and turns — so that we can build toward that like we did last season and give our audience another roller coaster.

TVLINE | So, the layout of Season 2 will be similar to Season 1, in that you’ll begin with a flash forward in the premiere, and then solve the wedding mystery in Episode 13, and then begin another new arc?
Yep. It seemed to really work. I feel like the signature of the show is how quickly we run through story, and I really don’t want to tell our audience, ‘Hang on and eventually we’ll get to it.’ It’s important to deliver on what’s been working for the show and what’s been working.

TVLINE | Getting back to the finale… At PaleyFest this year, you were asked if Emily’s mom might possibly be alive still. You skirted the answer pretty well, but were you quietly panicking that you’d show your hand and ruin the surprise? Or was that twist not even in the works yet?
We did have a plan… I like it when the audience is ahead of us, or at least participating as they’re watching. You can throw a lot of guesses about what’s happening in a show and there are only so many things that a show can do, but what’s fun about Revenge is the surprising way that we get there. So, it didn’t panic me, it actually made me feel like somebody was paying attention and watching very closely. For me, it was satisfying, rather than frightening.

TVLINE | Do you have anyone in mind yet for who might play the Clarke matriarch?
Well, I know the specific qualities that they’re going to need. I like an actor that can be very surprising. This [character] is going to have some deep psychological issues, so we’re going to need somebody that can play volatile and dangerous; all of the scariest parts of Emily’s personality are going to be present and apparent and a little bit out of control in her mother. But at the same time, what works so great for Emily is that sweet façade, so this woman needs to feel like she’s got potential for kindness. You look at her and you don’t know that she’s as damaged as she is inside. But you’ll quickly learn that this is a very dangerous person. So, those are the qualities that I need. We’ll go out to Meryl Streep and work our way down from there. [Laughs]

TVLINE | Sounds like a lot of thought has gone into the character… Is it safe to assume she’ll have a large presence next season? Or will it take awhile to really integrate her into the story?
It’s yet to be broken, because we don’t go back to the writer’s room until next week. But I have an idea about how we’re going to find her and I know the story about how she left her daughter, why, who was involved in that and the big event that predicated the separation. I also know the history and the endgame with the mom, but as far as how we get there, I kind of liken it to a little trip across country: we know where the destination is, and we’re going to take a lot of scenic routes to get there.

TVLINE | Are you at all concerned that the bigger you make the conspiracy surrounding David Clarke’s death that the show is going to veer too much into overly convoluted Alias territory? Or are you confident in where this it headed?
It’s the latter. There is concern [because] what works so great for this show are all of the mind games and emotional stakes… But we’re going to make sure that those things remain. But we have to expand the world otherwise you just repeat yourself. Emily has a really specific set of skills and she’s been using them for her own selfish ends for now. So, for her to start using them for a broader good is something we’ve always had in mind. There are a whole lot of people that we haven’t introduced yet, and not just in the conspiracy, but from Emily’s time in foster care and her time in “Revenge School” with Takeda; there are people that need some straightening out. So, yeah, we wanted to make the conspiracy something bigger — and maybe bigger than she’s capable of fixing — but we need story engines, so this is going to be a fun one. But [the show] will always be grounded emotionally, and that’s where we get out satisfying stories.

TVLINE | Talk a little about “Dark Daniel” and his budding relationship with Ashley.
Daniel is definitely going to stay dark and get even darker next season. Things are not going well right now. He’s reverting back to the person he was before Emily came into the picture, and also feeling his DNA, which is Grayson through and through. So, definitely there’s going to be a battle for his soul ahead of us, and Ashley will be a big part of it. She’s stepping into some pretty dangerous territory if she puts herself at odds with Emily, so Emily’s going to have to decide how she’s going to handle her and whether or not Ashley becomes a target.

TVLINE | Now, about Amanda and that massive baby belly… It seemed way too big for the amount of time she’s been away! That said, is it safe to assume Fauxmanda is back in action for the time being?
The timeframe is actually exactly right… She left September 1st, on Labor Day weekend, and now we’re in the late winter/early spring. So, that’s been a good six months. Fans can definitely look forward to seeing Fauxmanda and Emily in an epic battle for Jack’s affections, and it’s going to be a tough one. When we reveal where Amanda’s been and what exactly has happened in the interim and what her reason is for coming back, it’s going to be another big Revenge surprise.

TVLINE | It seems likely that Takeda is somehow connected to her return as well.
You can expect some more surprises where the Takeda story is going. Emily’s going to learn that there’s been a lot more at play with Takeda and that he has a larger plan of his own. He’s definitely been involved in shaping what happened with Amanda in these last six months, and for a very specific purpose.

TVLINE | What kept Emily from outing herself and Amanda to Jack right then and there?
I wanted to be consistent with Emily. She’s a measured person; she’s not somebody who’s going to make a rash decision or blurt something out. It took this long for her to want to come clean to Jack — which seemed like an emotional no-brainer for a very long time — and she needs more information… Plus, it just goes against Emily’s nature to do something spontaneous like that. Not to mention the fact that she was wrapped up emotionally and in a vulnerable position like we’ve never seen her… So, I don’t think her reaction was inappropriate for how she was feeling.

TVLINE | Let’s end with Nolan. What’s next for our stalwart prepster?
We’ve opened up the world to a larger conspiracy and to the search for family, which is something that Nolan has been on his whole life, really. He’s got a family of his own, whether its sisters or brothers — and I reserve the right to explore that. [Laughs] We also would love to get an appropriate romantic interest for him; I’m just not certain what shape that’s going to take yet. But I do want to expand Nolan’s world. We wanted Season 1 to be really focused on Emily and her quest for justice for her father, and now we’re broadening things out. It’s really important for us to start digging deeper into each character and giving them their own storylines.

If you like TVLine, you'll LOVE our weekly newsletter. Click here to subscribe.
Revenge Boss Answers Finale's Burning Qs (Someone Did Die!) and Spills Season 2 Secrets 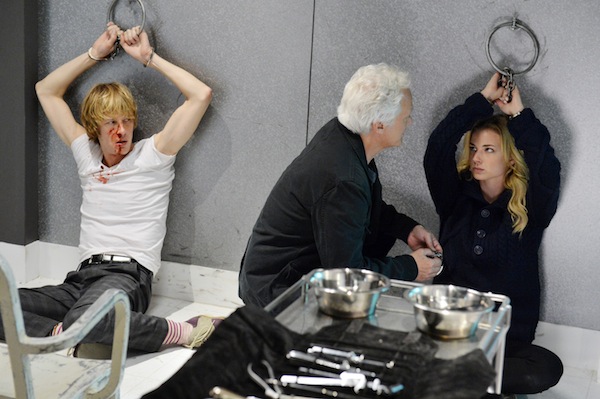