Warning: If you’ve yet to watch Friday’s episode of Nikita, avert your eyes now! Everyone else, read on…

“This is where everything starts to unravel, and nothing is going to turn out the way you expect it to.”

That’s what Maggie Q — star of The CW’s just-renewed Nikita — told reporters this week when asked what lies beyond tonight’s shocking cliffhanger. But that’s not all she shared.

Here’s what the butt-kicking beauty revealed about the Season 2 finale, airing next Friday — and how it will impact the now-guaranteed Season 3.

On Many Fans’ Favorite Nikita Moment Ever — Birkhoff Kissing His Beloved Nikki Goodbye | “It was so cute! [Executive producer] Craig Silverstein and the writers have always said that there is an undertone that Birkhoff’s in love with her…. It was always the nerd and Nikita. They were close, but he never told her how he felt. Now, we’re never ever going to get into that [relationship] because it’s dumb [Laughs]… but he doesn’t think he’s going to see her again! Aaron [Stanford] and I laughed so hard [during that scene]. He text me later and said, ‘Hey, Birkhoff gets some action!’ [Laughs] It was really perfect. Aaron is such a wonderful actor; it was just this wonderful moment for him.”

On the Penultimate Episode’s Jaw-Dropping Cliffhanger | “The clock is ticking and Nikita is not listening to anyone. She doesn’t want to live like this anymore, and she’s pissed so she’s being reckless. Nikita is now back in Division and she’s stuck — and she’s separated from Michael. Everybody’s separated actually, which makes it very dangerous. She’s completely off the grid down there.”

On the Seemingly Imminent Nikita/Percy Face-Off | “Yes, definitely. It’s been a long time coming. But you’re going to see a [new] Percy and Nikita dynamic… He puts her in a position where you have to see her working together with him, which it just so putrid and disgusting for her. She can either off him or help him, and only helping him will allow her to reach her goal. It’s so weird, you’re going to see them having each other’s back.”

On the Season Finale’s Body Count | “Yes, there will be loss — and I don’t mean a plant. [Laughs] I have to say, I was a little bit torn about [the death] — and by ‘a little bit’ I mean I was pretty torn about it. I understand all the elements that make this show work and why they work because of those elements, so I was a little bit torn about taking a very important element out of what we’ve done for two years — a quality element. But at the end of the day, Nikita’s journey has to move forward and to do that there has to be either some gain or some big loss, because only through those emotions do we grow. We rarely grow when we’re happy; we grow when we’re hurt.”

On What ‘Mikita’ Fans Can Expect from the Finale | “We’ll end on a Mikita moment. It not just a beautiful moment between them, but also one of the most visually stunning Mikita anything! It really was a magical weather moment.”

On the Possibility of a Little Birkhoff/Sonya Action | “They’re cute, huh? There’s going to be a cute little payoff moment with them in the finale, which is good. They’re finally at some point going to have some proxy to be able to have face-to-face [time].”

On the Finale’s Final Moments — Is There a Cliffhanger Coming? | “No, not a cliffhanger, but it definitely leaves on a big ‘wow’! I certainly don’t expect [viewers] to expect what happens in the end. You would never think it’s going to go the way it does… The overarching theme of Season 2 [was] “home,” and by the end we’ll understand what home is to her, what it isn’t, and how she’s come full circle in that way. It’s kind of beautiful, actually. We’re going to give people a little bit of hopefulness, but there’s also going to be a lot of shocker beforehand… It is cool what we do with [the end of this season]; the table is completely turned.”

Peruse the finale pics below, and then hit the comments with your thoughts on Nikita‘s life-or-death cliffhanger. 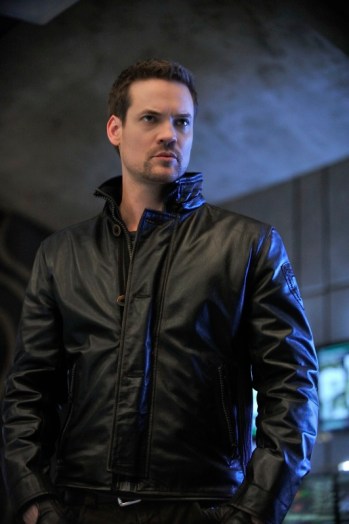