Romance — or at least a facsimile thereof — and a (possible) revelation are on tap in the April 29 episode of ABC’s Once Upon a Time, based on newly released photos from “The Stranger.”

Once Upon a Time: Emilie de Ravin to Return as Belle! Plus, a Frenemy Is Back!

Per the ABC synopsis, “August promises to enlighten Emma and take her on a journey that will show her how she can beat Regina and possibly take custody of Henry; with Mary Margaret returning to work, Regina puts a plan in motion to seduce David. Meanwhile, in the fairytale land that was, with the Evil Queen’s curse about to strike, Geppetto agrees to a plan that will save Snow White and Prince Charming’s daughter, but with a proviso that could also save his own son.”

For starters: Regina working her “magic” on David?! Sacrebleu! But it’s the other storylines that, combined, seem to point a neon flashing arrow in the direction of August’s true identity. Remember, this is the guy who claims he never lies and complained of “splints” when he neared the river in the last episode. Now, in an episode named after him, we get some Pinocchio backstory involving a seemingly tragic event near the water?

Could it be that the enchanted wardrobe that transported newborn Emma to safety in the pilot had Pinnochio secreted somewhere inside, and now grown he is the hog-riding “stranger”?

Check out the pics, try not to scream too much at the Regina pics, then weigh in with your latest theories. Once resumes its freshman run on April 22.

If you like TVLine, you'll LOVE our email news alerts! Click here to subscribe.
Once Upon a Time Shockers: Regina Makes a Play for David! And [Spoiler]'s Identity Revealed? 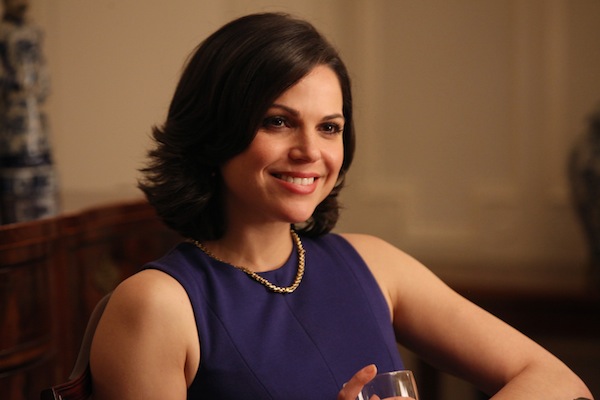