The following contains spoilers from the DC’s Stargirl series finale, which premiered Dec. 7 on The CW.

DC’s Stargirl this Wednesday night ended its three-season run on its own terms, having been invited to plan for a possible series finale. Fights were waged and justice was served, so much aftermath was had, and to top it all off, there was a time jump chockablock with fun facts and Easter eggs.

The cold open flashed back to nine months ago, where Dr. Ito and a reconstituted Jordan exhumed Sylvester’s body and readied to to accept a transplanted brain from the Ultra-Humanite — thus giving the baddies a beloved hero to propagate their brainwashing agenda. Dr. Ito in turn would have his own brain put into the albino gorilla and in doing so realize his best self.

Back in the present, Courtney, Yolanda, Beth and Rick came to realize that Starman/Sylvester has been fracturing and powering down their team. When Jordan summoned the JSA to the junkyard, ostensibly to talk things out, Starman informed Courtney that Pat was dead, having ventured into the woods alone and gotten killed by the Ultra-Humanite. Thing is, earlier in the hour we saw Pat extricate himself from his muddy grave. So when S.T.R.I.P.E. floated into the junkyard, “Starman” was thoroughly annoyed. And as it became clear that the Ultra-Humanite was in Starman’s body, an epic melee ensued.

Stargirl squared off against Icicle, S.T.R.I.P.E. took on the Ultra-Humanite, and Wildcat and Doctor Mid-Nite matched up again against Lily and Sofus Mahkent — though the latter was quick to take a pass on duking it out with Combat Mode Beth. Seeing the hubs flake out, Lily was rarin’ to start killing the kids, but Wildcat’s acrobatics happened to jostle free a junked car up above, which then fell and crushed the malevolent matriarch, leaving only her feet sticking out from the debris, Wicked Witch-style.

Cindy, Mike and Jakeem also arrived on the scene, where the former fought with her gorilla of a dad. And when that match-up turned brutal, Jakeem used Thunderbolt to help out “the prettiest girl in the world,” and the genie poof!d the gorilla into an adorable plush.

As Stargirl sustained icy blows from Icicle, an unexpected archer showed up to fire at least one arrow into Jordan — Barbara, having learned a thing or two from the late Paula. Cameron meanwhile grew increasingly conflicted about his allegiance, and ultimately unleashed the full fury of his own powers, transforming his father into some sort of frost cloud that drifted away. He then grabbed his grandfather and announced they’d be leaving town.

As for the Ultra-Humanite…. With a helpful nudge from Barbara, Courtney announced that the cosmic staff’s current beholder was not worthy, so Cosmo returned to her. Pat then slugged it out with a powered-down “Sylvester” and ultimately cleaned his clock (and irrevocably damaged the Ultra-Humanite’s brain) with a rock. 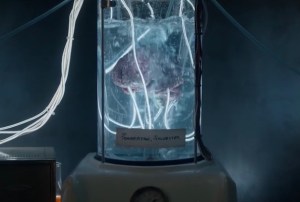 In the aftermath… oh, there was so much aftermath:

✭ Courtney, Pat and Dr. McNider decided to keep the Ultra-Humanite on life support, in case they one day find Sylvester’s brain (which we saw stored inside a far-off mountain).
✭ Courtney found Becky and delivered the note her father, The Gambler, meant her to have.
✭ Rick and then Beth apologized to Beth’s parents — after which Beth “officially” asked her folks to be her “sidekicks” (THEIR word, not hers).
✭ Yolanda reached out to her mom, saying that the truth has only made her friends closer with their own families. So, maybe it can do same for them?
✭ Pat and Barbara took Mike to reunite with his mom, Maggie, at her diner.
✭ Rick visited Solomon Grundy’s burial site and lamented how everyone seems to come back from the dead but his gargantuan buddy — at which point a big green arm thrust out of the ground.
✭ One night outside the vacant Mahkent home, Courtney turned around to see that Cameron had returned. When he asked if she truly could help him, they ran into each others arms and hugged.
✭ Jordan, hiding out in New Amsterdam, got his just desserts when Artemis lured him into a fiery death.
✭ And last but not least, in a flash-forward to “10 Years From Now”…. We saw Richard Swift aka The Shade lead a tour of a JSA museum that was stacked with fun Easter eggs. Courtney, he said, is now Starwoman; the current JSA includes Sand and Damage; the team at one point saved the Seven Soldiers of Victory by defeating the Nebula Man… and Rick and Beth are soon to be married!

The tour was then crashed by the blur of an arriving speedster — Jay Garrick’s The Flash — who announced that the JSA was needed ASAP, Swift included. Because as the end card made clear, it will never be “The End” for the adventures of Stargirl.

In the Q&A below, TVLine spoke with Stargirl creator Geoff Johns about planning for a proper series finale, and more.