The following contains major spoilers from the Nov. 6 episode of SEAL Team, now streaming on Paramount+.

In the eighth episode of SEAL Team Season 6, life outside the wire was starting to look really good for Clay Spenser (played by Max Thieriot), as he suggested to wife Stella (Alona Tal) that they blow up their family’s three-foot world, put Vah Beach in the rear view mirror and start themselves a new life far removed from him not operating, Green Team et al.

But not since Clay told Jason ahead of the Mali op that he planned to pause operating has a red flag waved so high. Clay’s sweet confab with Stella was interrupted by a call from Ben, the despondent guy he met at Ray and Naima’s vet center the week prior. Clay headed out into the night and found Ben about to vandalize an Armed Forces recruitment center. And when Clay talked Ben out of trashing the place, Ben pulled out a pistol to aim at his own head.

Clay deftly managed to talk Ben out of ending his life, and took the gun from his hand. But then a security guard’s flashlight suddenly illuminated the men, revealing the gun in Clay’s one hand, and a frightened-looking Ben in the other. The guard quickly pumped two bullets into Clay, who fell to the ground and died on the spot, as Ben slipped off into the night.

In the wake of screening this week’s episode, TVLine hopped on the phone with showrunner Spencer Hudnut, to talk about how series vet Thieriot’s new Fire Country role influenced Clay’s fate, and how Bravo will process this bombshell while heading into a highly dangerous missing spanning the two-part season finale (streaming Nov. 13 and 20).

TVLINE | Spencer, my feelings about you right now as a showrunner are very complicated.
Yes, I can imagine. That’s how I feel at times about myself, so….

TVLINE | CBS ordered the pilot for Max’s Fire Country in early February, it was ordered to series in mid-May. At what point in the development process for that show did this SEAL Team “off-ramp” start taking shape?
It really started toward the end of Season 5; there were some questions about whether Max would be back for Season 6, so the Season 5 cliffhanger [in Mali] was a bit dictated by that. And as Fire Country kept passing each development checkmark, it got clearer and clearer that there was a real possibility that we’d be losing Max at some point. So for the storyline we came up with for Clay this season, we knew we’d have to keep him separate from the team to maximize how much we could get out of Max before he left. 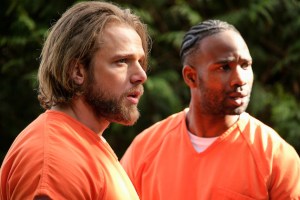 In terms of the decision [to kill off Clay]…. I really was kicking the can down the road as far as possible, hoping that Max wouldn’t be leaving the show, and that we would keep him. It wasn’t until maybe even a month after Fire Country got picked up [to series] that it became clear that Max was leaving. Everyone had talked about how he could do both shows, but it was very clear that that wasn’t the case.

TVLINE | That as ambitious as Max aspired to be, it simply wasn’t tenable.
It wasn’t. He’s shooting [Fire Country] up in Vancouver, he’s the star of that show, we were in second position…. Our seasons don’t line up, and we’re now doing short orders…. Right now I’m sitting here breaking Season 7, so how could I incorporate Clay not knowing if/when/how we could get him back? It really wasn’t until after Fire Country got greenlit to series that we had to confront this reality, and at that point we had already broken most of the season and written half of it. We were a bit boxed in.

TVLINE | So… there was a scenario where CBS’ Fire Country is DOA upon premiering and Max winds up out of two jobs.
That was a possibility, but truthfully I’ve had a ton of faith in Fire Country ever since Max first talked to me about it. It’s a great show. If I had thought it had a chance of tanking, I may have made a different decision about Clay’s fate, but I’m fully confident that that show is going to air for years on CBS. I’m really proud of Max and excited for him, but at the end of the day I have to do what’s best for SEAL Team, and it felt like if he was going to leave, having his departure have the biggest impact on the show and on the team was my responsibility. But [killing off Clay] was the hardest decision I’ve had to make on this series, by a long shot.