With TV’s LGBTQ inclusion hitting highs in recent years, TVLine is celebrating Pride Month 2021 with a look at many of the characters who walked so that the movement toward better representation could eventually run.

But to be clear, there were many stumbles during those early years, as gay TV characters were quietly weaved into stories and met with decidedly mixed results. 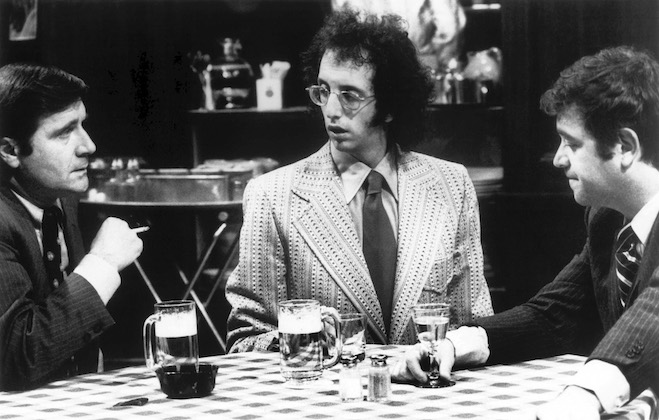 It was 49 years ago this month that the first recurring gay character on American television made his debut — set designer Peter Panama on the little-known ABC sitcom The Corner Bar. Played by Vincent Schiavelli (Fast Times at Ridgemont High, Ghost), Peter was met with derision by, among others, the Gay Activists Alliance, which took issue with the character’s flamboyance. The sitcom’s producer responded by… changing up the cast for Season 2, minus Schiavelli’s Peter.

Not a teaching moment.

Years later, ABC’s Soap became the first U.S. sitcom to feature an openly gay lead character, though Billy Crystal’s Jodie Dallas drew similar criticism. The difference this time was that those voices were heard, and Jodie was reworked to be a more accurate, and positive, portrayal.

And just like that, progress was made, very (very) slowly but surely leading to the rich, inclusive TV landscape we have today, where Billy Porter can win an Emmy for playing an HIV-positive ball emcee.

TV’s inclusion of LGBTQ characters hit an all-time high — 10.1 percent of broadcast-TV’s series regular characters — as recently as November 2019, before the pandemic played havoc with schedules. The number of transgender characters is on the rise. Racial diversity among LGBTQ characters has increased. But amid such gains, there is also the fact that The CW’s Batwoman is currently the only broadcast show with an LGBTQ lead character.

But navigating highs and lows has been the name of the LGBTQ inclusion game for five decades, as seen in our look back at 22 characters who took small steps forward (and occasional steps back), but over time accomplished great leaps.

Again, this is not a round-up of every LGBTQ TV character ever, but instead a curated list of those whom we believe made significant impacts and/or were a part of meaningful “firsts” — feel free to weigh in with your own picks and how they specifically moved the inclusion needle!