La Brea, which was a freshman hit for NBC, opened Season 2 on Tuesday night by introducing a brand-new threat for Eve & Co. and revealing a surprising truth about Gavin, Izzy and Ella’s sinkhole leap.

Picking up “The Next Day” after the events of the Season 1 finale (or so the episode title would suggest), we see that Sam and Levi (but mostly Sam, given Riley’s vanishing) have been leaning on a tied-up Silas to spill on how to create a sinkhole. Levi has to rein in Sam some (“We have to be humane!”), especially since they want to keep peace with Paara and her people, who soon arrive at the clearing with needed foodstuffs. Silas buys himself some time by pointing his captors to a building that’s a day’s walk north (aka the tower that Aldridge took Scott to), after which Eve and Levi immediately make tracks. 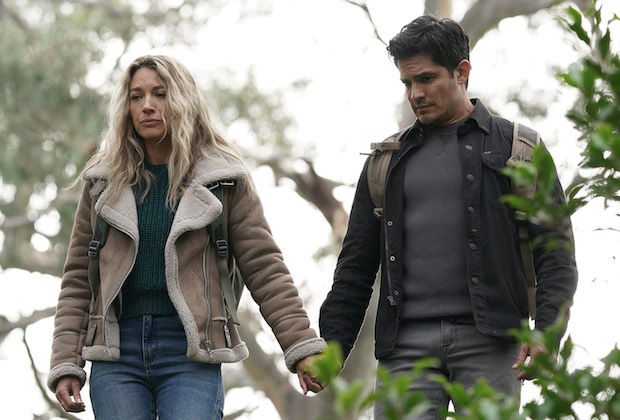 In their travels, Eve and Levi run into Lucas, who had dug and made a burial site for his mother Marybeth, who died before they could get to a light portal. The three then witness Veronica (last seen wounded by a bear trap) being hauled away by a new, especially mean group of locals armed with steel machetes. Eve wants to double back/get help from the clearing, but Lucas takes immediate action, cueing Veronica to create a distraction while he sneaks up on and clobbers one goon. Levi joins the melee while Eve frees Veronica, after which they all race off. When one of the baddies catches up to them, Levi sends the others ahead while he waves a gun at the guy. After dodging a hurled spear, Levi gets off a shot that hits the guy in the shoulder. Alas, Eve meanwhile gets grabbed by another of the marauders, and thrown into their crude prison wagon. Levi later catches up to said wagon and surrenders, so that he may be at Eve’s side.

Gavin, Izzy and Ella, we learn, are planning to walk 20 miles a day, from where in Seattle the sinkhole (seemingly) plopped them, to Los Angeles. Along the way, Gavin and Ella each realize they are no longer having visions, since the kid versions of them (Isaiah, Lily) are not in 10,000 B.C. anymore. With Ella griping about how they leaped sans food or supplies, Gavin sets out to (successfully!) hunt a boar, though along the way he draws the interest of a woolly rhino. Izzy meanwhile slips hard and cracks her prosthetic leg’s socket, something she keeps to herself and chooses to tough out for the time being. When Gavin later suspects/shares that they’re being hunted by the big rhino, what’s lurking in the bushes instead turns out to be a wee baby one! Alas, the li’l guy scampers off to his parents nearby, creating a dilemma for the humans. Noting that woolly rhinos “see” with their hearing (Fact Check in Aisle 1!?), Gavin creates a distraction while Ella and Izzy (who has come clean about her injury) try to dash across the clearing. Fortunately, it turns out the rhino dad was actually charging at the rhino Gavin had met earlier, and the beasts have zero interest in the piddly humans.

Shortly thereafter, Izzy, Gavin and Ella come across pieces of the “Hollywood” sign that we saw topple into a Los Angeles sinkhole in the cold open — which makes little sense, since they’re barely a day’s walk from Seattle. But when they subsequently spot the Petersen Automotive Museum wreckage off in the distance, signaling the landing place of Eve and the others, they realize they in fact have been in California this whole time!  #Convenient

Elsewhere, Aldridge continues to lead Scott toward the glass-and-steel tower, though she warns that those inside will want her — and by association, him — dead. Yet forge on they do, until Rebecca reveals a secret entrance hidden beneath/inside a pool of water, and they descend the (improbably) revealed staircase… 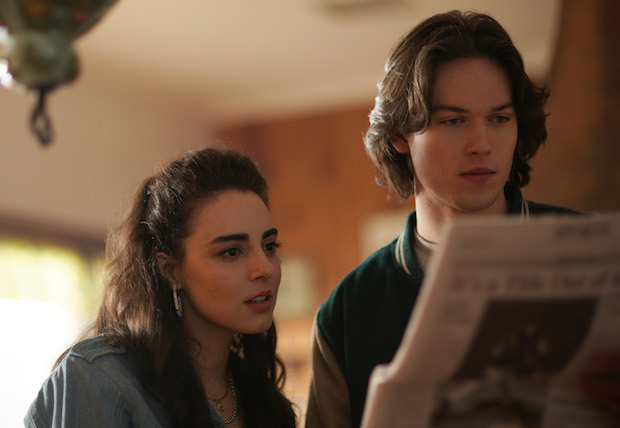 Josh and Riley come to alongside a paved road. After getting faked out by an old timey truck, the two confirm they in fact are now in the 1980s, as evidenced by the cassette tape some kids lobbed out of a passing convertible. They then witness rugrats Isaiah and Lily getting picked up by some nuns in a station wagon up the road — but since Josh still exists, all is good on that front! Josh and Riley creep up on a nearby house, jiggle some back doors until they find an unlocked one (bless you, friendly 1980s suburbia!), and in the midst of scarfing down some food, realize that the owners are away on vacation for a week.  They kick back but do fret some about getting back to their families in 10,000 B.C., until they spot a headline about the sinkhole that opened at the “Hollywood” sign, there in 1988.

Grade La Brea‘s Season 2 premiere below, then peruse our burning questions/share your own!