This week on NBC’s La Brea, the man who runs the Lazarus tower was revealed, Eve’s shearling magically reappeared, and Riley and Josh made hungry eyes at each other.

Pulling the cart full of black rock up to the security gate outside the Lazarus tower, Gavin somehow managed to bluff his way past the suspicious guard, even as Eve’s concerned eyes and squeaky clean blonde hair peeked out from her mask. But when Kira (Broadchurch‘s Simone McAullay), a woman stationed inside the tower’s mission control, detected that Silas was nearby, an alarm was signaled and the guards were told to detain the new arrivals. Silas, Scott and Lucas came out of hiding to help Gavin, Sam, Eve and Izzy fight off the guards, but Gavin wound up getting dragged away, into the anachronistic structure.

While Scott took Lucas, who had sustained the “cattle prod” burn marks we saw last season, back to the clearing, Silas led the others to a secret entrance to the tower, “guarded” by a giant bird. Eve took the initiative to distract the bird while the others dashed for the grate, and just squeezed past the door herself before the creature closed in. 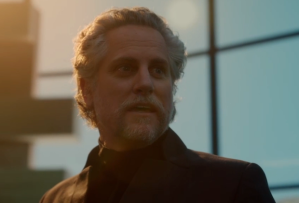 Meanwhile inside the tower, Gavin met the man in charge — James, as in his father (played by Wrecked‘s Jonno Roberts). James explains that he, like Caroline and their son, is from the year 2076, and that they traveled to 10,000 B.C. to see that the dystopian future obtains the natural resources it has suffered from by doing without. All Gavin cares about, he declares, is reuniting his family, by getting Josh back from 1988. James, though, claims that Aldridge misled him, because the portal inside the tower, which is powered by traces of uranium in the black rock, only goes to 2076.

Caroline went to run the code that would help stop the tidal wave from hitting California, but the power went out. She sent Josh and Riley to the nearby, closed ice rink she has been stealing juice from, to plug in new fuses. Upon completing the task, Josh and Riley are told to stay put until the code finishes running, just in case the powers dips again. But as they laced up and hit the ice, to “Hungry Eyes,” and even have a near-kiss, Caroline reported over the walkie-talkie that the bad guys who have been trying to stop her work have shown up at her hideout. 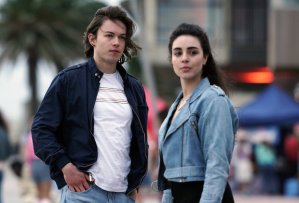 Racing to Caroline’s hideaway, the kids found her missing. But using a clue she uttered over the walkie-talkie, they discovered inside a Wheaties box some sort of gizmo she left for them. Saying that her dad would know what it is/does (and why is that?), Riley gets the idea to find 1988 Sam and have him commit information about the portal to memory, so that he can “know” it in the future, in 10,000 B.C. (My brain just broke, too.)

BACK IN THE LAND DOWN UNDER….

When Kira and the guards catch Eve & Co. inside the secret access tunnel, James and Silas (his own dad) exchange words. And when James reiterates that the portal only goes to 2076, Sam suddenly “gets” the memory that Riley planted in the past, telling him that, per Dr. Caroline Clark, the portal absolutely can take them to 1988. Busted, James abandons his selfish wish to not have his reunion with his son cut short, and lets Gavin, Eve et al portal to 1988.

AND NOW WE’RE BACK TOPSIDE…!

Waiting at the Santa Monica Pier (or at least an Australian facsimile), Riley and Josh see Gavin, Eve, Izzy and Levi racing to them across the beach. When their hugs are interrupted by a rumbling Earth, Riley reports that another, massive sinkhole is coming — but one that maybe they can stop!

Review our questions about Episode 6 below, and drop your own in Comments!