On this date 25 years ago, Fox welcomed us to the small Texas town of Arlen, with the animated comedy King of the Hill making its TV debut. Centered on propane salesman Hank Hill and his family and friends, King of the Hill was a mild, humane family comedy — a sharp contrast to the zany antics of its fellow Fox cartoon The Simpsons — and a certified hit, running for a total of 13 seasons and more than 250 episodes. The cast was chock full of colorful characters, from conspiracy-minded exterminator Dale Gribble to Hank’s wildly offensive war vet dad Cotton… but for our money, the show has one and only star: Hank’s 13-year-old son Bobby Hill. 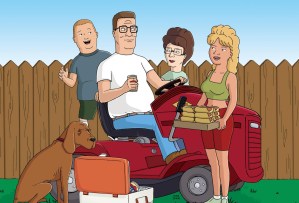 We’ve seen plenty of TV kids come and go over the years, but none were quite like Bobby. A potato-shaped class clown who dreamt of growing up to be a prop comedian, Bobby had no interest in sports or traditional boy stuff, which came as a crushing disappointment to his dad Hank. But he was a constant delight to us, with his strange musings and eccentric interests. (The best King of the Hill episodes found Bobby undertaking an odd new hobby like ventriloquism or rodeo clowning, and usually excelling at it.) He was anything but conventional, but he was always proudly himself, and that’s what we loved about him.

A big factor in our Bobby Hill fandom is the impeccable voice work of Pamela Adlon, who went on to star in Louie and Better Things. To be clear, this show had plenty of great performances — the late Brittany Murphy is still heartbreakingly perfect as ditzy sweetheart Luanne — but even among them, Adlon stands tall. She won an Emmy for her work as Bobby, and it’s easy to see why, with her raspy, squeaky tone adding extra layers to Bobby’s oddball personality. In her hands, simple line readings turned into laugh riots. It can be hard to picture Bobby Hill’s voice coming out of the mouth of Better Things‘ Sam Fox… but we’re so glad it did.