Carole Baskin might have an affinity for big cats… but can she handle the beast that is ballroom dance?

The Tiger King star is among 15 celebrities who will compete on Dancing With the Stars Season 29, TVLine has learned. She’s joined by fellow Netflix alum Monica Aldama, better known as Navarro College’s tough cheerleading coach on the streamer’s docuseries Cheer.

Three more TV personalities — The Bachelorette‘s Kaitlyn Bristowe, Catfish‘s Nev Schulman and The Real‘s Jeannie Mai — will be vying for the Mirrorball trophy this fall, along with actors such as Desperate Housewives‘ Jesse Metcalfe and One Day at a Time‘s Justina Machado.

As always, the cast boasts a few athletes, including Olympic figure skater Johnny Weir, Super Bowl winner Vernon Davis and NBA All-Star Charles Oakley. But Season 29 will notably not welcome anyone from the political world, on the heels of ex-White House press secretary Sean Spicer’s controversial run in Season 28.

Dancing With the Stars, now hosted by Tyra Banks, returns on Monday, Sept. 14 at 8/7c on ABC; celebrity/pro pairings will be revealed on the season premiere.

Check out a new poster for Dancing‘s upcoming season below, then scroll down to view the full cast and drop a comment with your thoughts! 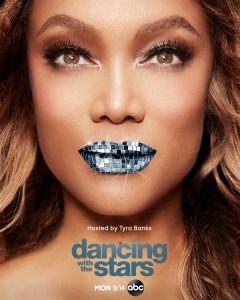