Fuller House‘s entire five-season run was peppered with callbacks to Full House, but the Netflix comedy went above and beyond for its just-released final episodes. And we have the show’s stars to thank for it, apparently.

“We kept giving the writers more [ideas], because we remember most of the things from the show,” Candace Cameron Bure tells TVLine. “Where they would give one nugget, we would give them another five on top of that. In that scene in the attic, Jodie and I were the ones who were like, ‘We need the Honeybee costumes and D.J.’s lips phone!’ They just have the newer things in the attic. We’re the ones who always suggest more and more.”

Adds Andrea Barber, “A lot of our writers haven’t even seen Full House, oddly enough, but Candace and Jodie and I were like, ‘We know all the relics you need to pull out.’ And some of them aren’t even referenced. We don’t even talk about them. You have to keep your eye out and look for them. This was our last chance to do all these callbacks, and we jammed in as many as we could.” 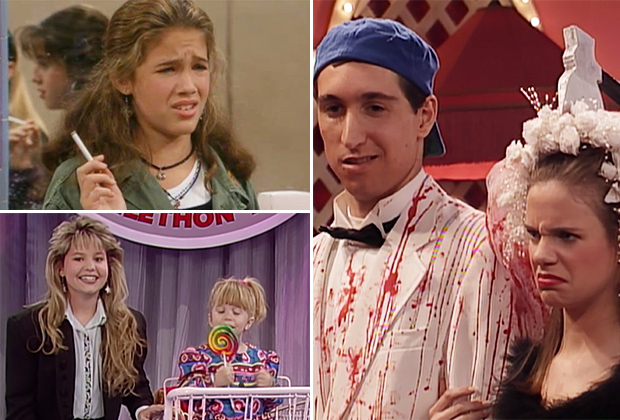 For this list, we chose to focus on the final nine episodes of Fuller House, which hit Netflix earlier this week. From old Tanner family memorabilia (D.J.’s lips phone!) to familiar guest stars (so many exes!), no stone was left unturned — or unreferenced — in the second half of Season 5.

Did we miss a few? It’s possible, but hey, that’s what the comments section is for! So check out our gallery of Easter eggs and references — click here for direct access — then drop a comment with any of your own additions below.