Gotham‘s David Mazouz is high on “Five,” as in the nickname sported by Bruce’s doppelgänger, first glimpsed at the close of May’s finale. “People are thinking he’s an evil version of Bruce, but he really isn’t,” says his portrayer. “He’s a guy who was created for a very specific purpose, and he’s ‘lost’ when we find him in Season 3.”

Penguin, Fish Mooney and other baddies, however, remain quite bad when the Fox drama returns Monday, Sept 19 at 8/7c, with its new “Mad City” arc. Evoking the comic books, “You are going to see how the villains have become more and more part of the fabric of the city,” executive producer John Stephens previews. “It’s become less of the police show that it was in Season 1” — especially with Jim Gordon (Ben McKenzie) now working as a bounty hunter, occasionally assisted (and or agitated) by intrepid newshound Valerie Vale. 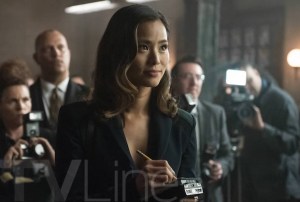 “You find Valerie in the midst of it all asking the tough questions [about Indian Hill’s escapees],” says Jamie Chung (Once Upon a Time), “trying to get to the core of the story.”

The high volume of villains even have a new haunt to call home — The Sirens, a nightclub run by the darkly, deliciously dynamic duo of Barbara and Tabitha (Erin Richards and Jessica Lucas) and featuring the hypnotic Jervis Tetch aka The Mad Hatter (The Walking Dead‘s Benedict Samuel) as a main attraction — while Season 3’s bigger picture will gradually focus on the mighty and powerful Court of Owls, which was teased last spring. “That storyline is going to be upsetting, especially, as you’ll see, at the end of Episode 4,” Stephens warns.

Regardless, a certain kid crusader will aim to silence the ominous Owls. Per Mazouz, “Bruce is really the only character that says, ‘We need to do something about this,’ and he does” — with more than a little help from manservant Alfred (who has new sets of his own to play with, in an observatory and tricked-out kitchen). “You see them really come together with the warmer aspects of Michael Keaton’s Bruce/Alfred relationship,” says Sean Pertwee, “as opposed to the brusqueness you saw in Seasons 1 and 2.”

BONUS SPOILER!: Street rat Ivy Pepper will have undergone a big change when she resurfaces in Episode 2, now played by the older, statuesque Maggie Geha. “Selina just thinks it’s a new person in Gotham, so she doesn’t think anything of it,” says Camren Bicondova. “But when Selina eventually does find out, she feels betrayed, because she thought her friend died. So yeah, that’s a whole thing!”