The following contains a dialogue spoiler from the Season 2 finale of Leverage: Redemption on Freevee.

TV is having a very meta week so far, with no fewer than three shows working in wink-wink nods to cast member’s previous roles.

On Monday night, you had a Fantasy Island guest explaining how her friend disappeared “without a trace. Like the TV show” — to Elena Roarke, who is played by Without a Trace alum Roselyn Sanchez.

An hour later on Fox, Alert: Missing Person Unit‘s Nikki remarked on how “I love a fairytale ending” — and Nikki is played by Dania Ramirez, whose previous credits include Once Upon a Time (as Season 7’s Cinderella), Tell Me a Story (where in Season 1 she played a Gretel counterpart) and the fantasy series Sweet Tooth.

But the one to beat may have come during the Leverage: Redemption Season 2 finale, now streaming on Amazon Freevee.

Leverage vet Alec Hardison (now played on a recurring basis by series vet Aldis Hodge) for much of this season has been occasionally videoconferencing with his teammates from the cosmos, where he has been working to fix a spy satellite that a rich movie star uses to help refugees around the world. And as the finale drew to a close, Hardison reported to the team that his gig has been extended by two months, so he wants Parker, Sophie et al to plan an out-of-this-world heist, by “stealing” him from the satellite station he now calls home.

When the team appears to scoff at the suggestion and walks away, Hardison begs them to reconsider, explaining how, among other things, freeze-dried space meals taste like “baby powder.”

He then points out the pop culture fare he has missed out on, saying, “I done missed three DC movies. Three! I don’t know what’s going on. Who’s fighting who?!” 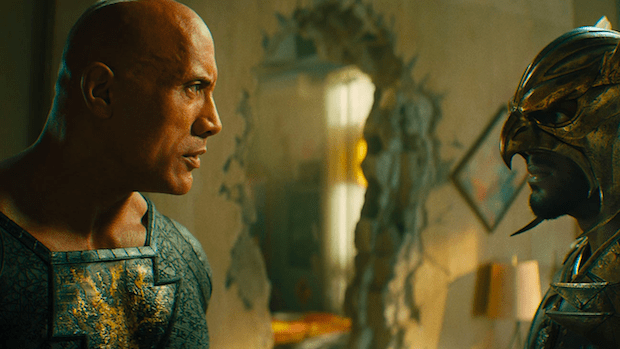 Hardison’s portrayer, Aldis Hodge, of course starred opposite Dwayne Johnson in the recent Black Adam movie from DC Studios — as Carter Hall aka Hawkman, who himself fights the title character on multiple occasions!

What did you think of Hardison’s DC shout-out, and Season 2 as a whole? (And do you think any possible Season 3 will actually involve The Outer Space Job?)  Vote below!