A weather emergency in Tuesday’s Season 4 premiere (Fox, 8/7c) puts Torres’ Tommy Vega in the path of Trevor, an attractive single father played by Lucifer‘s D.B. Woodside. It’s a path that Torres is more than happy to walk. Again. 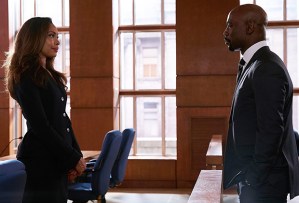 “I know I was happy about it,” Torres tells TVLine of Woodside’s casting, which marks the actors’ fourth time sharing the small screen. They previous played love interests on USA Network’s Suits, as well as its short-lived spinoff, and even appeared together in several episodes of Fox’s 24. Their working relationship began in 2003 when they played husband and wife in The Law and Mr. Lee, fondly remembered by Torres as “a pilot that never saw the light of day.”

Given their extensive history, you might assume that Torres had a hand in casting Woodside, whom she refers to as “a friend, and a great actor and collaborator.” But you’d be wrong! “I honestly didn’t know,” she swears. “[Showrunner] Tim Minear surprised me with this. I knew he was just coming off Lucifer and was taking some time off, so I wasn’t sure if he would want to do an open-ended character arc. I was very happy that he was able to come and play.”

And play he does, arriving on the scene during a torrential downpour of frogs, a Biblical-sounding scenario Torres refers to as “horrifying” because “these things can happen.” (It’ll make sure sense when you watch the episode.)

An obstacle arises by the end of the premiere which could challenge Tommy and Trevor’s future together, but Torres hopes the audience will root for them to overcome it. This coupling has the power to “bring a sense of comfort to her, especially coming off that ill-fated brother-in-law interlude,” Torres says. “Trevor is age appropriate, he’s seen some things, he’s done some things — they’re peers. Maybe Tommy is finally finding her mind again.”

Hit PLAY on the video above for your first look at Woodside’s entry into the 9-1-1 universe, then drop a comment with your hopes for Season 4 below.