Aubrey Plaza as this weekend’s Saturday Night Live host returned to her old 30 Rock stomping grounds, having worked there as an NBC page when she was in college.

As such, it was inevitable that her monologue — which opened with her assuring us that, trademark sarcasm and all, she truly does “care” about (some) things, and featured a cameo from fellow Delawarean President Biden — would find her reflecting on that years-ago gig. And it was equally inevitable that she would then slip on her old page’s jacket and offer viewers a backstage tour (requisite headdress-wearing showgirls and all).

Plaza showed us why as a page she never got assigned switchboard duty (something about her being a “bad page” with “terrible phone etiquette”), and Kenan Thompson apparently is still waiting on a coffee she was fetching him in 2004. 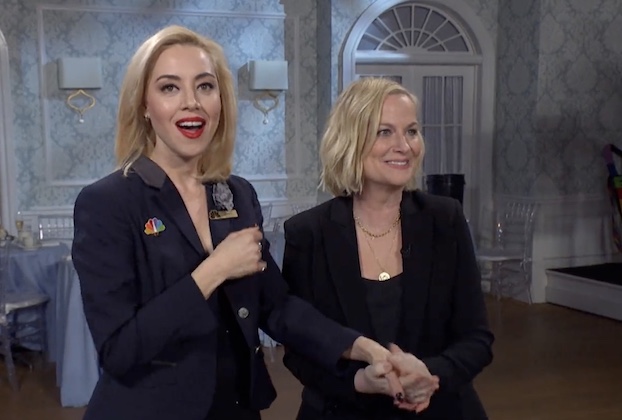 Then, just as Plaza was rolling her eyes over how tour groups would hope to spot a celebrity roaming the halls, who greets her but SNL alum and former Parks and Recreation co-star Amy Poehler.

“Aubrey, I see that you’re wearing your page jacket,” Poehler commented. “Are you drinking again…?” After which Plaza apparently lifted Poehler’s wallet.

(And if that wasn’t enough Pawnee power for you, Plaza and Poehler later literally played April and Leslie during Weekend Update!)

What did you think of Plaza’s monologue? Watch the full video above, and weigh in!