The following post contains spoilers for The Resident‘s Season 6 finale. Proceed with caution!

It was a finale full of happy endings for the men and women of The Resident — but that was very nearly not the case for one character in particular.

“We strongly considered letting [Gov.] Betz die,” series co-creator Amy Holden Jones divulges to TVLine. “It would have been fictional revenge. But our team usually wins.”

Instead, the governor remained very much alive throughout Tuesday’s Season 6 closer, and he indeed held up his end of the deal to restore Chastain Park’s full funding after his successful heart transplant. Among the finale’s other warm-and-fuzzy moments: The Chastain docs saved sweet Sammie after a Kawasaki disease diagnosis and one very risky surgery; Devon proposed to Leela, who also became attending surgeon; Padma was happily reunited with her twin boys; Ian was rehired at Chastain after sharing his addiction struggles with Kit; and Conrad and Billie exchanged “I love you”s for the very first time.

Below, in a Q&A conducted via email (and edited for clarity), Jones elaborates on how the season ender came to be and offers early intel on a potential seventh season. (Fox has yet to make a renewal decision.)

TVLINE | I was struck by how well this episode seemed to work as a series finale, in the event it needs to. Was that an approach you and the writers intentionally took, should the show end with Season 6?
We do this every year. Last year’s worked as a series finale also, but thankfully, it wasn’t to be. We left open questions and put new character arcs in place to launch us into Season 7. We never hear until May, so it’s a recurring issue.

TVLINE | There are so many lovely happy endings and milestones in this episode: Both Sammie and Chastain’s survival, Devon and Leela’s engagement, Padma’s return. Were there any drafts in which things didn’t go so beautifully, especially regarding Betz holding up his end of the bargain with Chastain?
No drafts, but many discussions. It was never an option to lose Sammie. Chedi Chang is an incredible talent. She and Remington Blaire Evans [who plays Gigi] are amazing together, and I adore them both. I’d love to write a Disney+ show for them both. We strongly considered letting Betz die. It would have been fictional revenge. But our team usually wins.

TVLINE | Conrad and Billie also shared a big moment here, as they said “I love you.” How important was it to you to get that milestone just right, when it’s the first time Conrad has said that to someone since losing Nic?
It was important, and seeded in quite purposely from the start. The “CoNic” relationship was so incredibly powerful that Conrad needed a lot of time to even imagine who [he] could have those feelings [for] again. Time heals, even if we never forget. I lost my own husband during 2019. We were together my entire adult life. So grief and loss immediately became a theme of the show. People we love aren’t replaceable in every instance, but Conrad is young, and Gigi needs a mom. What he and Billie share is so complex, and one of the strong pulls for him is that they both loved Nic. 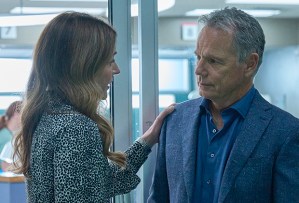 TVLINE | At the moment, I know there’s been no news about a Season 7 renewal. Have you gotten any indication from Fox, one way or the other, about what the decision might be?
I have not gotten any indication. Losing a cast like this one seems insane to me, but corporate decisions are a mystery.

TVLINE | On a related note, what can you share about what Season 7 might entail? Bell’s multiple sclerosis and Ian’s sobriety appear to be lingering threads. Are there other character storylines, or real-world healthcare topics, you’re especially interested to explore in a seventh season?
I believe the fans want to see how Conrad and Billie build a life, and what challenges they face. And there’s an Indian wedding to look forward to. How will Bell and Kit deal with the mix of his being a patient and a doctor? I want to see more of him teaching and watch Kit fight the inevitable new battles in profit-driven medicine. She has family that may become a story, too. We want Jake to move to Atlanta with Greg and Sammie. And it’s time for Raptor to reignite his love life and work with Dr. Yamada and Conrad. I adore this new lead, played by Ian Anthony Dale [as Yamada], and want to give him complexities and see his relationship with Cade grow, or crash and burn. Andrew McCarthy has so much to give on every possible level. We’ve just gotten started with Dr. Ian Sullivan. And, of course, new interns would arrive!

Season 6 shows the amazing resiliency of this show. Even if we lose wonderful characters, like Nic and Mina, we create new ones who bring fantastic stories to fill the void. Making this show is the hardest work I’ve done, but it’s also a personal joy and privilege. I was on set for the season finale, of course. As we shot the scene where Irving yells, “Chastain lives!” I asked our fabulous producing director Rob Corn for a take where he yells, “Chastain lives! On to Season 7!” The entire ER echoed with the cheers. This cast is the happiest and most unified I’ve seen in all my time in the business. The incredible crew loves coming to work. I will always be proud of all we’ve done and how we’ve done it. If it ends, there will be sorrow, but we rang the bell. If not, our goal has always been higher and higher, better and better. I can promise a great Season 7, should it occur.

With that, I turn it over to you. What did you think of The Resident‘s Season 6 finale? Grade it in our poll below, then elaborate in the comments!