Hallmark Channel’s new family drama The Way Home follows three generations of mothers and daughters with complicated relationships… and a connection to a time-traveling portal?

Sunday’s premiere begins with a scene from Port Haven, New Brunswick, circa 1814, during which a mob of men run after a young woman whom they believe is a witch. Before they can catch her, the woman says something mysterious and jumps into a small body of water. 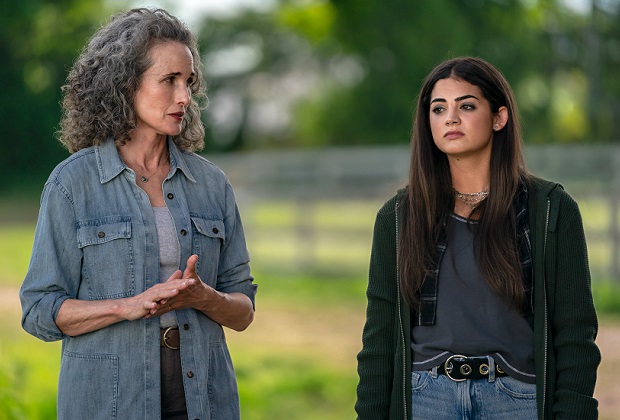 Cut to present day Minneapolis, where Kat (played by Supergirl‘s Chyler Leigh) and her ex-husband Brady (Pretty Hard Cases‘ Al Mukadam) are struggling with their rebelling teenage daughter Alice (Sadie Laflamme-Snow), who pulls the fire alarm at a school talent show, then throws a party at her own home. After her ex proves to be completely useless in disciplining Alice, Kat decides it’s time for a new start. She’s been fired from her newspaper job and her estranged mother Del (Cedar Cove‘s Andie MacDowell) has written her a letter asking her to come home, so it’s the perfect opportunity to begin anew at their family farm in Port Haven, Canada.

Kat hasn’t been back home in 20 years because the place carries heavy memories of her dad and her little brother Jacob, both of whom have passed, even if Del has removed all traces of them from the house. This causes tension between mother and daughter, which is further complicated by Del’s insistence that she never sent a letter to Kat. Meanwhile, Kat and Alice aren’t faring much better, with Alice constantly in a teenage funk about her new home, school, etc.

Mom and daughter find a friendly face in Elliot (Awkward‘s Evan Williams), who was Kat’s neighbor/best friend before they lost touch and is now the high school’s science teacher. (He is also divorced, Del points out.) When Elliot sees Alice, something flickers across his face. Then at school, he tells Alice that if she ever needs to talk, he’s available any place, any time. 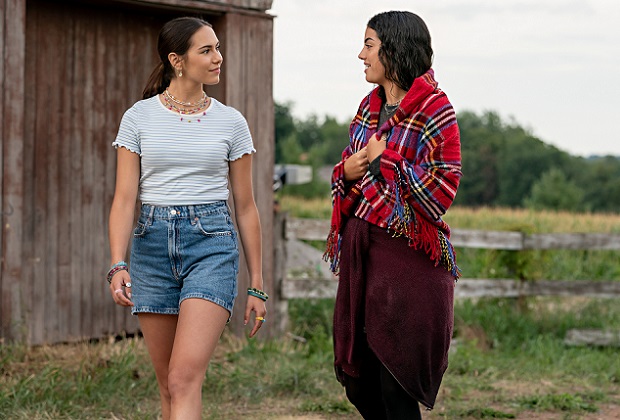 When Alice ditches her first day of school, Kat tracks her down and tells her that her dad’s new girlfriend is moving in, so any hope Alice had of going to live with him is gone. She runs off to the pond on the farm’s property and tosses the bracelet her dad gave her mom (which she gifted to Alice), before deciding to retrieve it. But as she reaches for it, Alice falls into the water… and is pulled out by her teenage mom (I Am Frankie‘s Alex Hook) in 1999!

In this timeline, Kat is still friends with Elliot and has just gotten a summer camp job, where she will meet her future husband and Alice’s father. The family dynamic is also completely different, as Alice learns when she has a warm and happy dinner with Kat, Del, Kat’s dad Colton (When Hope Call‘s Jefferson Brown) and her little brother Jacob.

After dinner, Alice finds teenage Elliot (David Webster) and tells him that he once said she could come to him for help. Back in the present, Kat finds a Polaroid that Jacob took during that 1999 dinner of her and an indistinguishable Alice. Meanwhile, Elliot reassures a worried Kat, who has no idea where Alice ran off to, that her daughter will find her way home. As the episode comes to a close, Elliot waits by the pond.

What did you think of The Way Home? Grade it below, then hit the comments!