Night Court is back in session, and Dan Fielding is back on the case… although he’s on the other side now.

John Larroquette returns as the smug attorney on NBC’s new revival, reprising the role he played on the 1984-92 courtroom comedy. The actor admitted to reporters at the Television Critics Association winter press tour that he was wary at first about “the idea of trying to revive something that we did 35 years ago when we were young and agile and acrobatic and maybe funny. To try at 75 years old to go back to that seemed a real error in judgment on my part, if I had said yes.” 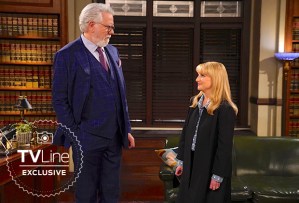 But he was intrigued by the prospect of exploring how Dan Fielding had changed — and maybe even grown — since he last saw him: “How often does an actor get a chance to revisit some character that he played three and a half decades ago? And what was the length of that journey, and what happened to him in his life?… So it became an exciting problem to solve.”

Times have changed, of course, and Larroquette concedes that “some of the humor that Dan Fielding presented in the 1980s may not be funny today.” (He was a notorious womanizer and chauvinist, for one thing.) “He still thinks he’s the smartest person in the room,” but “he doesn’t have the hunger a young Dan Fielding had… Whatever fantasies he had about his life at 35 are all gone.” Dan is now a widower in the new series, he adds: “He is an old man who has withdrawn from life considerably… So it was a journey finding the jokes again.”

The new-look Night Court features a surprising new role for Dan as well: The former prosecutor is now the night court’s public defender. “He has to switch gears, which gives him a bit of an exercise he has to do intellectually, to have sympathy and empathy for the people he’s defending.” 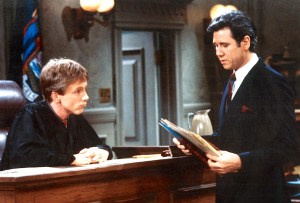 Larroquette also remembered his late co-star Harry Anderson, who starred in the original series as Judge Harry Stone and died in 2018. “He was always performing for us,” he recalls. “When you do a sitcom, obviously you sit around a lot, so we had a lot of time just to be friends and talk to each other.” He noted that Anderson worked in Larroquette’s hometown of New Orleans as a busker doing magic on the streets in the 1970s, although they never met back then. “It was just always fun on the set, with all of us.”

Larroquette is the only cast member from the original Night Court to return for the NBC revival. (Along with Anderson, co-stars Charles Robinson and Markie Post have passed away in recent years.) The Big Bang Theory‘s Melissa Rauch stars in the revival as Judge Abby Stone, the daughter of the original series’ Judge Harry Stone. In the new series, premiering this Tuesday at 8/7c, “Judge Abby Stone follows in the footsteps of her late father Judge Harry Stone as she takes over the night shift of a Manhattan arraignment court,” per the official description.