While it will be fun to see Oliver Queen, Wally West and John Diggle return during The Flash‘s farewell run, the fact remains that No. 2 on fans’ wish list is to see Cisco one last time. What say Carlos Valdes?

Barry’s BFF Cisco Ramon, played by original cast member Valdes, last was seen in The Flash‘s Season 7 finale, where he officiated the #WestAllen vow renewal. Since then, the character has been living off-screen in Star City with girlfriend Kamilla, after he took on the job of Director of Technology and Science for A.R.G.U.S.

Valdes appeared at the Television Critics Association winter press tour in Pasadena on Saturday, on behalf of Hulu’s upcoming musical rom-com Up Here (in which he co-stars opposite Parenthood‘s Mae Whitman). Afterward, TVLine caught up with Valdes, who it must be noted is rocking much shorter, tidier hair than Cisco ever did.

We pointed out that The Flash episode in which Stephen Amell, David Ramsey et al appear just wrapped filming last night/this morning, leaving just four episodes to go. Might Valdes slip into one of them?

“I just don’t know,” the incredibly genial actor shrugged — after which we suggested that it could be as simple as the New York-based actor “FaceTiming” a Cisco check-in, which then gets green-screened onto someone’s S.T.A.R. Labs tablet or monitor. (“Pitch that!” he quipped.)

The CW has no comment on Cisco possibly showing up during the 13-episode farewell season, which kicks off Wednesday, Feb. 8. But Valdes told TVLine, “I can’t imagine a scenario” where Cisco doesn’t to some degree figure into the Arrowverse series’ final run. 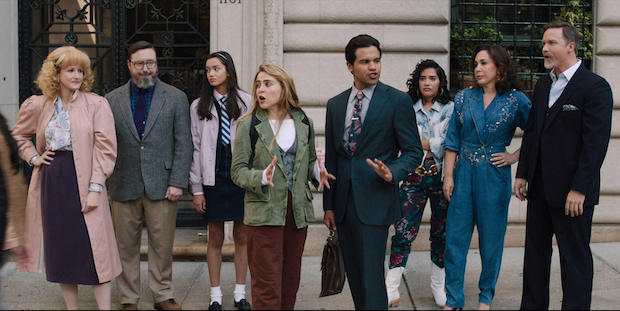 In the meantime, Valdes’ fans can assuredly catch the actor-singer in Hulu’s Up Here, which will release all eight episodes on March 24.  Set in New York City in the waning days of 1999, the musical romantic-comedy follows “the extraordinary story of one ordinary couple as they fall in love — and discover that the single greatest obstacle to finding happiness together might just be themselves — and the treacherous world of memories, obsessions, fears, and fantasies that lives inside their heads.”