When we last left Servant‘s Turner household, things were still going bump in the night, and answers? Yeah, those were few and far between.

As a result of the perpetual rotting of the townhouse, a broken railing sent Dorothy plummeting from the home’s tippy-top floor. (Get refreshed with our Season 3 finale recap here.) Soooo, is she alive or what?! That answer is a very obvious “yes.” (We wouldn’t want to miss out on one last season of Lauren Ambrose now, would we?) But let’s recap the rest of this Hitchcockian Season 4 premiere, shall we?

As we first re-enter the Spruce St. residence, Leanne is preparing a welcome home gathering for Dorothy. After grabbing some flowers from her car, she’s followed into the house by a creepy member of the Church of Lesser Saints. When she flees back to the car, the street is filled with cult members, who all scatter once another car drives down the street.

She hides in the locked car while she waits for Sean and Julian to arrive home. She’s suspicious of everyone she sees. A female jogger. A street meat vendor. It’s clear she can’t trust anyone out there. And when she exits the car, her suspicions prove to be right on. The vendor attacks her and throws her to the ground. She escapes by stabbing him with a pen. The jogger circles back and throws hot liquid in her face. Leanne kicks her to the ground and jumps back in the car. When the freakshows all start banging on the windows, she lays on the horn to get them gone. 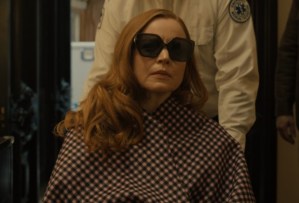 As she cleans off her face, she sees Aunt Josephine in the rearview mirror. The old, dead, ghost woman tells her, “You will burn like the rest!” Seconds later another man approaches. “You must come back,” he pleads. He promises they don’t want to hurt her, but it’s probably safe to say his promises don’t mean squat. “You can’t hurt me,” Leanne responds. “I’m not who I used to be. I’m something more.” (Uh, want to clue us in here a bit, Leanne? It is the final season and all…)

The church members try to smoke her out of the car, so she slams it in reverse and pins a guy’s legs between two cars. And then things get really weird. A flock of birds circles the car and the cult members, ultimately chasing them away. One feathered creature even plucks a guy’s eyeball out! (Servant always reliably helps fill out our year-end roundup of TV’s grossest scenes.)

Shortly after, Dorothy pulls up in an ambulance. She’s using a wheelchair, but we’re still left in the dark about the severity of her injuries. (Will she ever walk again?) Julian confirms it’s a spinal injury. He says physical therapy could help her regain most of her mobility, but nothing is guaranteed. And naturally, Dorothy wants nothing to do with Leanne, nor does Sean want the women communicating either. (So, kick Leanne out, maybe?)

As Leanne is shut out of the couple’s bedroom, a huge crack in the basement foundation eerily spreads all the way out to the sidewalk and the street.

Will the Turners still have a standing house by the end of the series? And what did you think of the Season 4 opener? Grade it below, then drop some comments!