When the agents of NCIS, NCIS: Hawai’i and NCIS: Los Angeles banded together to uncover a killer conspiracy, they received a rather unexpected but entirely welcome assist.

The 3-way crossover event saw an assembly of Parker, Torres, Palmer, Tennant, Tara, Callen, Blye and many others canoodle their noodles to get to the bottom of a beloved FLETC instructor’s shocking suicide. Long, three-hour story short: Said prof was privy to top-secret information about “Simon Williams,” a Carlos the Jackal- (or, Dread Pirate Roberts!)-like network of CIA assassins who years ago operated under that one pseudonym. Now, a rogue faction was aiming to resurrect “Simon,” for even less scrupulous reasons.

In the crossover’s closing NCIS: LA episode, while trying to draw out the bad guys (and in doing so hopefully locate a kidnapped Rountree and MIA Kilbride), Callen and Sam each received cryptic texts that, when put together, unlocked an audio message — from a garbled but distinctive voice.

“Sounds like you’ve got yourself in a bit of a pickle,” Hetty noted. “I warned Hollis that his Simon Williams days would come to bite him in the ass.

“You are all quite capable, and far be it for me to tell you what to do,” she continued. “But you might want to contact an old friend, Gwen Johns….” 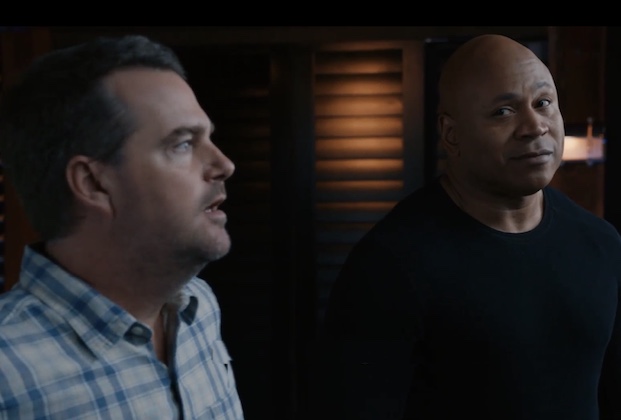 In addition to noting that Alden still owes her $600 for “the Monaco fiasco,” Hetty’s message led the agents to a Hollywood casting agent who years ago found a ringer for Kilbride, to double as the admiral on numerous occasions. Callen & Co. in turn used that actor to lure the baddies to the boat house and take down some of ’em, eventually leading NCIS to a remote airfield where Rountree was being held — and where Kilbride was laying in wait, ready to take a case-closing sniper shot at the rogue group’s leader.

Speaking about Hetty’s surprise, audio cameo, NCIS: LA showrunner R. Scott Gemmill (who wrote Part 3 of the crossover), tells TVLine, “The triple crossover was such an important event for all of our NCIS families that it was important to have Hetty (played by Linda Hunt) be a part of it, even if she was physically unavailable.

“In true Hetty fashion, she proved not only to be on top of what was going on,” Gemmill added, “but she even offered some cryptic advice to help get them out of a jam.” 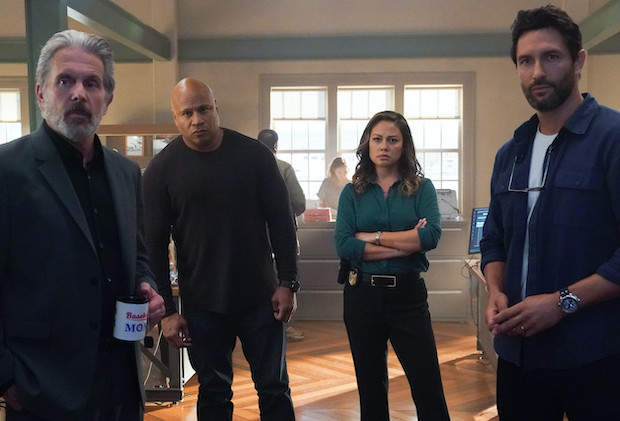 “We shot it backwards, which really made for ‘interesting’ acting choices,” NCIS: Hawai’i front woman Vanessa Lachey shared with TVLine.

“We shot the end first, then we shot Hawai’i, and then we shot the OG, the mothership,” Lachey explained. And because of that inverted order, the cast members of the different shows sometimes need to remind themselves whether their characters were meeting for the first time or not!

“Literally, we came into one of the offices and I was like, ‘Have we met yet, at this point?’ And [NCIS:LA‘s] Chris O’Donnell was like, ‘I don’t think so….’ We had already shot the finale, but I was like, ‘OK, but this is the point where I’m first seeing you.’

“And when Todd [LL Cool J] came to Hawai’i, I said, ‘This is your first time in our bullpen,’ so he changed his acting when he walked in. He made sure to take it all in. We just had to kind of remind ourselves, ‘Have we met yet at this point?’ Since we shot it backwards.”