Sunday’s Mayfair Witches premiere may not have included any demonic crock-pots magically springing to life, but the kickoff to AMC’s latest Anne Rice adaptation still delivered a surprise ending fit for a Pearson.

The first episode introduces us to Dr. Rowan Fielding (Alexandra Daddario), a brilliant surgeon with commitment issues and untapped magical potential. (Surely we can all relate to at least one of those things, no?) When Rowan learns that her adoptive mother’s cancer is back, she turns to her hospital’s chief of surgery, who not only sneers at the idea of Rowan getting her mother into an experimental stem cell trial but also chastises her supposed arrogance. These unkind words don’t sit well with Rowan, who kinda-maybe-accidentally gives the jerk a brain aneurism.

Rowan’s mother Elena insists that she isn’t to blame for the incident, but the follow-up phone call Elena makes to a mysterious agency tells a different story. She’s desperate to find out if something has “changed” about her daughter, and she’s assured that an agent is being sent to investigate. The agent, Ciprien Grieve (Tongayi Chirisa), assures Elena that Rowan is safe from “the man” for now and promises to continue protecting her after Elena is gone.

Rowan then applies to work at Revenia, the company responsible for the aforementioned stem cell trial, but she and her new boss don’t exactly get off on the right foot. He first pees in front of her (what even?!), then tells her to choose which patient she’d like her mother to replace in the trial. None of this sits right with Rowan, so she reads Jerk No. 2 for filth, ultimately sending him toppling to the floor just like the last guy who pissed her off. Sensing a pattern yet? 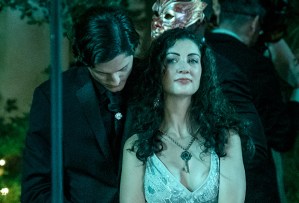 The premiere also introduces us to Dierdre Mayfair, a young troublemaker who is sent to live with her aunts after her mother’s alleged suicide. She doesn’t believe her mother purposely jumped from the balcony, a suspicion she shares with her uncle Cortland (Harry Hamlin), a southern gent whose legendary parties are as over-the-top as his accent. It’s at one such party where Cortland introduces Dierdre to a boy named Patrick, and they hit it off immediately. They share a dance, which leads to some weird sex — and before you know it, Patrick is being taken away in a stretcher.

Patrick and Dierdre’s night together, while tragic, also results in a pregnancy. An increasingly desperate Dierdre attempts to take her own life months later by jumping from the balcony, but she’s stopped by a man named Lasher (Jack Huston). The twisted character tells her that the baby she’s carrying will change her life, and he asks Dierdre if she’ll take him to be hers forever.

We’re then treated to a real gut punch of a montage, juxtaposing the birth of Dierdre’s baby with the death of Rowan’s mother.

As for the big This Is Us-style twist I mentioned earlier, here it comes: We’ve been watching events unfold in two different timelines, and Dierdre’s baby grows up to be — wait for it — Rowan! Present-day Dierdre, now 47 years old (and played by the great Annabeth Gish), suffers from a strange affliction that prevents her from speaking. Or is it just that she’s too heavily medicated to communicate with anyone? Either way, her physician is determined to figure out who she really is… and something tells me that Rowan will soon be doing the same.

OK, let’s talk: Are you ready to join the Mayfair Witches‘ coven, or did this premiere not bewitch you like you hoped? Weigh in via our polls below, then drop a comment with your full review.