Now that your broadcast-TV favorites are on holiday break, TVLine is looking at how each network’s shows are stacking up thus far in the 2022-23 TV season — next turning our attention to NBC.

Listed below is the average DEMO RATING for each NBC series (including Live+7 DVR playback). Alongside that is the TOTAL AUDIENCE for each program, as well as any noteworthy PERFORMANCE NOTES.

Each program’s RANK represents how it is faring in the coveted-yet-dwindling 18-49 demo compared to other shows on NBC, since that’s what matters come renewal/cancellation time; any ties in the demo were “broken” by total viewership. (*=already officially renewed) 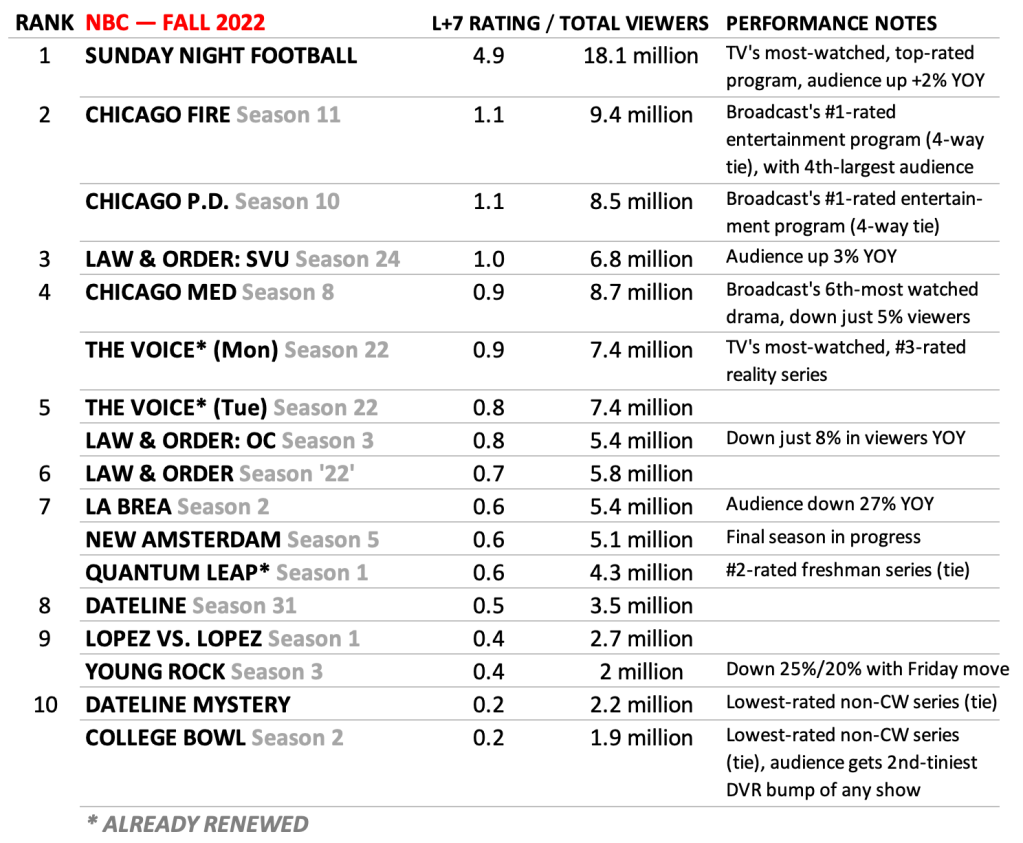 THE TVLINE BOTTOM LINE: SNF continues to easily sack all others, while the #OneChicago trifecta (averaging 8.9 million viewers and a 1.0 rating) puts up a smaller but younger audience than CBS’ three most-watched dramas (which average 9.6 mil and a 0.7). (Note: NBC has put off any scrapping of the 10 o’clock hour until at least the 2024-25 TV season, so don’t fret for your first responders just yet.) The Voice still reigns as TV’s most-watched reality program, ergo the decision to return with a springtime cycle. For all the summertime promotion, Quantum Leap should have opened bigger, though its early Season 2 renewal demonstrates faith. Not only is La Brea down sharply from its freshman run, but it is — not unexpectedly! — putting up a fraction of This Is Us‘ final-season averages (8.1 mil/1.6) in the time slot.