Stewie Griffin will need to find a new arch nemesis in 2023.

Family Guy‘s midseason finale, which centered around Stewie and Doug (voiced by Chris Parnell) competing for the coveted title of class snack captain, ended with Stewie casually mentioning to Brian that Doug “died in a commuter plane crash this morning.”

As any regular Family Guy viewer can attest, the Fox comedy is loaded with jokes that don’t actually happen  — like when Quagmire allegedly impregnated his own father back in 2018, something that was never spoken of again.

And even if a character does die, there’s no guarantee that it’ll stick. How many times have we seen Peter killed — either by someone else, or by his own hand — only for him to reappear in the next episode, or even the next scene, as if nothing ever happened? 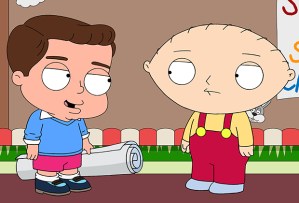 But in the case of Parnell’s character, TVLine can officially confirm that Doug is no longer with us. The midseason finale, titled “The Candidate,” served as his final appearance on the show. Since his introduction in 2019, Doug has popped up in 13 episodes, much to Stewie’s chagrin.

Your thoughts on Doug’s untimely passing? Drop ’em in a comment below.