Now that was an ending.

When I Hate Suzie‘s third and final episode kicks off, it’s finale night on Dance Crazee, and Suzie is getting busy in her dressing room with her new partner Danny. It’s a madhouse backstage, as the show’s producers inform her that due to a royal being in the house, they need to make changes to her routine. In addition to all that, Suzie awaits the results of her drug test. Yep, you guessed it: It’s an absolute recipe for disaster.

As part of their latest “crisis chat,” her representatives ask if she’s been sleeping with Danny. She lies and denies it, but the look on her face slowly morphs into panic. The threat of another scandal is likely more than she can take right now. 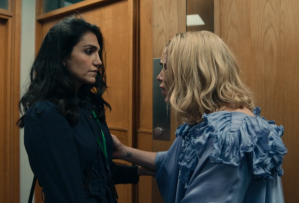 With the live show beginning in just 10 minutes, Suzie sees Naomi hugging Cob. After yet another troubling encounter with her family, Suzie’s in tears heading to set, and boy, is the tension building! She pulls Una aside and asks who might know about her and Danny. Unfortunately, “everyone knows,” the girl says, so finding the source of the leak is pretty much impossible.

Meeting with her reps again, Suzie pitches the idea of offering the press a new story. She wants them to leak that Cob wants to separate her from Frank on Christmas as punishment for doing the show. She figures it can replace the Danny story, plus, everything she’s saying is true. But Holland and Sian don’t buy it. Suzie then suggests outing Danny as bisexual, proving that the woman is, indeed, off her rocker. Thankfully, she has some very sane, very professional reps.

As she gets pampered with last minute hair and makeup touches, we can see her start to disassociate. Her dance kicks off, and what better song for her to perform to than a cover of Hole’s “Miss World.” (“I am the girl you know, I lie, I lie and lie… I made my bed, I’ll lie in it / I made my bed, I’ll die in it.” Kind of perfect, right?)

Surprisingly, her solo is beautiful and goes off without a hitch. But her family never made it to their seats, which has her bugging. Frank and Cob are in her dressing room, she’s told, and the look of fear dominates her face. Before she can enter, the lawyers call and say her drug test was inconclusive (thanks to the bleaching of her hair). But her initial excitement is smashed once the lawyers say it won’t hold up in court. “This is just a battle, Suzie. It’s not the war,” they say. But she doesn’t want to be in either.

She tells Cob he can take Frank for Christmas, and he accuses her of liking chaos. (He assumes her drug tests came back positive). They argue. Suzie admits it’s been Naomi who’s been texting him. Cob then says that even Naomi thinks she’s crazy, revealing how much time those two have been spending together. Naomi says nothing’s going on besides her job as Suzie’s “unpaid nanny, mediator and secret agent,” and before we know it, Suzie’s fighting with Naomi and asks if Naomi had sex with Cob. So much for reconciliation.

Suz gets dolled up once again and goes back to set for the final group dance, and gives a performance that is pure fire. It’s sexy, edgy and fierce as hell. When the results come in, Suzie surprisingly wins the competition! She’s shocked and overwhelmed. The host asks her how she feels and hands her the mic.

And that’s when keeping it real goes wrong.

She thanks the viewers at home and says it’s the best moment of her life. Then she says its all for Frank, and tells the boy that despite what he might read about her, she loves him. She apologizes for not being able to see him on Christmas. By this point, she’s in tears and fully breaking down.

Then, the breakdown becomes a meltdown. 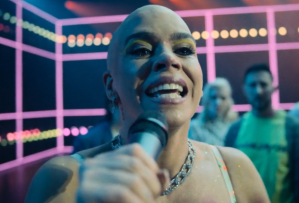 She tears off a wig to reveal a bald head. “This is something I had to do because my hair went to s–t because of Frank’s dad!” And yes. She’s still holding the mic. She tells Cob he’s not taking anything else from her that’s hers. She beats herself in the head repeatedly, as her agent swoops over to put an end to it all. She searches for Naomi who’s nowhere to be seen. “I’m so proud of you, Nay. Your boundaries! I’m so happy for you.”

Pop music starts playing over the speakers and Suzie starts to hallucinate that she’s looking her finest and dancing with her mom. The audience can’t get enough of her. Everyone loves her. She exudes love and light. She tells Frank he’s her everything. She basks in fame. She is a STAR.

But then we cut back to reality. Bailey is trying to lure her off the stage, while chaos envelopes her. She’s sitting on the floor by herself having a mental break on a now-empty stage. She’s maniacal and refuses to get up as security eventually pulls her away.

That ending! Grade the finale and the season overall, then hit the comments.