The following contains spoilers from the first four episodes of The Best Man: The Final Chapters. Proceed accordingly.

The Best Man: The Final Chapters reunites the beloved friend group across eight, hour-long episodes as they tackle midlife crises and renaissances and enter a different stage of their lives. The gathering is bittersweet, though, with one friend missing from the festivities.

Mia (played by Monica Calhoun) passed away from cancer at the end of 2013’s The Best Man Holiday, and her husband Lance (Morris Chestnut) has been grieving ever since. Despite her death, The Final Chapters found a way to bring back Calhoun while also paying homage to the character.

Episode 1 picked up where we left off in the last film, with Lance still mourning his wife and burying his feelings with a string of one-night stands. As the friends celebrated Quentin’s impending nuptials with fiancé Xiomara Amani (Nicole Ari Parker) at an island paradise, the widower couldn’t help but think that his wife would have loved the view from the fancy villa.

Later at dinner, as Quentin and Xiomara began their ring ceremony, Lance’s mind again drifted to Mia. We then saw a brief flashback of Lance and Mia kissing on their own wedding day in The Best Man. 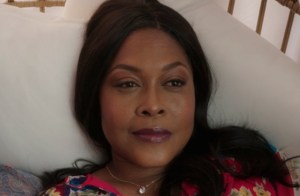 In Episode 2, Lance dreamt of him and Mia (with Calhoun reprising her Best Man role) relaxing in a cabana by the pool. “This is so perfect,” she told him in the fantasy sequence.

“It’s paradise,” he noted. “There’s no place I’d rather be than with you right now.” As the pair expressed their love for each other and kissed, Lance shot up in bed and realized it was just a dream. For the NFL star, Quentin and Xiomara’s upcoming wedding was an agonizing reminder of what he lost when his wife died.

In his grief, Lance did connect with a hotel manager named Jasmine, who helped him open up while at the villa. (In case you were wondering, Quentin ended up marrying Shelby instead of Xiomara).

In the aftermath, Lance struggled to figure out what to do with his career now that he was retired. After an unsuccessful run as a sports analyst, he decided to return to football. Plus, he went extra hard on his eldest child, who was training to follow in his footsteps.

What do you think of The Best Man: The Final Chapters so far? Grade the first half of the season below, and then sound off in the comments.