Eve, Gavin et al are safely back in 10,000 B.C. when NBC’s La Brea resumes its sophomore season. But they may have returned a world/time that is even deadlier than they unexpected.

In the latest of TVLine’s exclusive 2023 First Look photos (shown below), Eve (played by Natalie Zea), Gavin’s mom Caroline (Melissa Neal), Riley (Veronica St. Clair) and Sam (Jon Seda) seem no worse for the wear after leaping into the 1988 Hollywood sign sinkhole, with Gavin, Izzy and Josh, to get back to the Lazarus Tower and upload a virus that will stop all sinkholes — despite knowing that this will mean they will never get home again.

But back in the “land down under,” danger awaits. And we are not talking about that which was glimpsed in Gavin’s new vision!

In “Stampede,” the first hour of the double-episode midseason premiere airing Tuesday, Jan. 31 at 9/8c, TVLine has learned that an unlikely leader rallies the Clearing to face an oncoming prehistoric threat. And then in the second hour… well, the title “Murder in the Clearing” kinda says it all. Because yes, one of the survivors is murdered, after which Lucas (played by Josh McKenzie) and Sam lead an investigation to ID the killer. 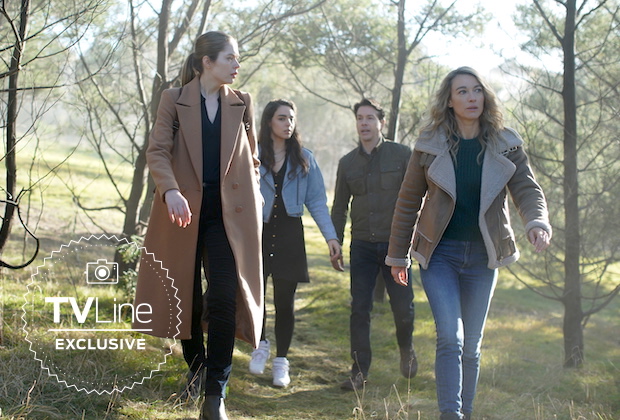 Gavin meanwhile embarks on a mission to save Eve from the fateful vision he has had of her death, first experienced in the fall finale just as the Harrises readied to leap back to 10,000 B.C. 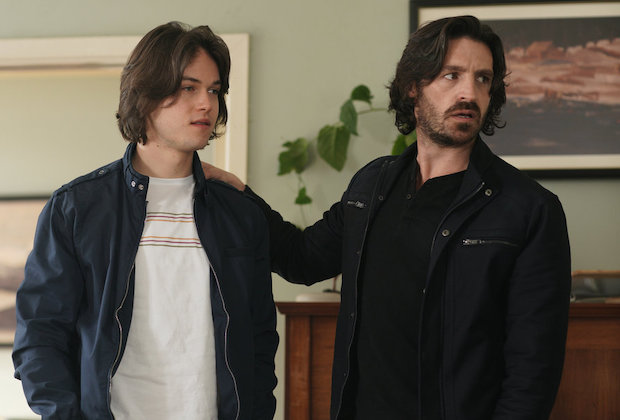 “That vision of Eve’s death is really going to drive a lot of conflict in the back half of the season,” La Brea showrunner David Appelbaum told TVLine, “because it might be right around the corner.

“It’s going to be a real problem — how do we prevent that?” the EP posed. “It’s going to complicate all the relationships, knowing that that is a thing that could happen.”

Want scoop on La Brea, or for any other midseason premiere/show? Email InsideLine@tvline.com and your question may be answered via Matt’s Inside Line.