For Kindred‘s Dana James, breaking her family’s generational trauma meant looking to the past for answers.

The finale of Hulu’s series opened with a flashback to Brooklyn in 1989 that revealed Dana’s mother Olivia had doubts about being a mom after her own mother walked out on her. But if Olivia’s disappearance years later were any indication, her mother probably didn’t just up and leave. She may have gotten stuck in the past like Olivia: an awful future that also awaited Dana if she couldn’t figure out how to stop the jumps.

In the past, Thomas had banned Kevin from ever stepping foot on his plantation again, and it was Sara’s job to inform Dana that she now belonged to Thomas. Dana took that as her cue to leave and packed up all of Kevin’s things, readying for a jump back to the present.

But she ran into Luke’s son Nigel, who suspected that something happened to his father. Dana broke the news that Luke had been sold, and the young boy then begged for her to take him with her since he had nobody left. But there was no way he was going to 2016 with them. He had to stay behind, as Dana explained, and needed to be brave to survive on the plantation. 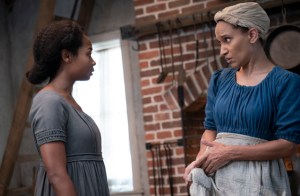 Elsewhere, Winnie escaped from the Hagars’ house and refused to return to the plantation, so she took Kevin’s clothes and disappeared. Kevin, meanwhile, waited at the house while Olivia went to rescue her daughter. She stumbled upon Sara, who expressed her grievance over Olivia and Dana ruining her plans to rid the plantation of Margaret. The cook had been killing Margaret’s children and planned to do the same with Rufus, but Dana saved him on the night of her first jump to the past. Sara firmly believed that the time travelers were nothing but trouble.

Thomas found Dana, who offered to teach him to read. This angered the slave owner, who then dragged her outside to teach her a lesson about disobeying him after he specifically told her not to continue reading his books. Thomas violently whipped Dana’s exposed back, and Olivia rushed to intervene. The trauma from the violent act throttled Dana — along with Olivia, who held onto her daughter — back to the present. But Olivia was nowhere to be seen after the jump.

Returning to when we first met Dana laying on the floor, she soaked in the tub and charged Kevin’s phone as two officers banged at her door. When she finally let them in, they were immediately concerned about the severe injuries to her back. That’s when Dana’s aunt Denise showed up, followed by Kevin’s sister Penny, who worried her brother had relapsed and had tracked his phone to her house. Penny, not Dana’s nosy neighbors, called the cops when she couldn’t get a hold of him. Dana immediately kicked everyone out, allowing her niece to process what just happened and open up about her time jumps.

Dana explained everything that happened thus far and was distraught over leaving Kevin in the past when she told him she wouldn’t. Back on the plantation, Thomas confronted Kevin, demanding to know how Dana and Olivia had disappeared so suddenly. Kevin then realized that Dana went back to the present without him. 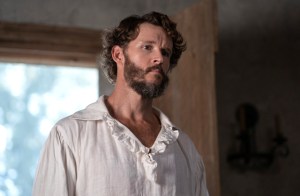 In 2016, Dana concluded that if she kept Rufus alive until her next ancestor was born, then maybe the jumps would stop. She just needed to know when that person would be born. Denise suggested they look at the bible containing the records of their ancestors who were enslaved, and that’s when Dana pieced together that Rufus and Alice were supposed to have a child together — not Rufus and Carrie, like she originally thought. Alice was the ancestor she was supposed to save.

As Dana braced for a return to the past, Denise received a startling phone call from Alan: Olivia had been found… in the present.

What did you think of Kindred’s season finale, and the season overall? Grade the episode below, and then sound off in the comments.