Early next year, Catherine Willows is going to spot a very familiar face in Sin City. 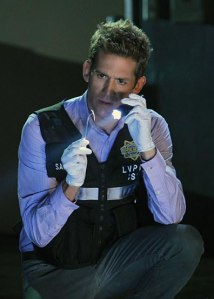 TVLine has learned that original CSI cast member Eric Szmanda is set to reprise his role as Greg Sanders during the latter half of CSI: Vegas‘ current second season. His multi-episode guest stint will reunite him with his aforementioned former co-star Marg Helgenberger.

Szmanda portrayed the CSI tech for the entirety of original CSI‘s 15-season run on CBS.

Helgenberger was added to CSI: Vegas‘ Season 2 ensemble partly to fill the void left by fellow OGers Jorja Fox and William Petersen, both of whom departed after the revival’s first season. While Petersen had only signed on for Season 1, Fox was a possibility to return for Season 2. Ultimately, however, the actress opted to follow her longtime leading man out the door.

“For me, CSI has always been a love story,” Fox said at the time. “The story that people can find love in the darkest of places and times. I personally just can’t split Sara and Grissom up again. So goes Grissom…..So goes Sara. Wherever they go, they belong together.”

Back in June, then-CBS Entertainment chief Kelly Kahl said that despite kicking off last year with just 10 episodes, CSI: Vegas is not by design a short-season series. To wit, Season 2 will consist of 21 episodes.