With FX’s Kindred, which premieres all eight episodes this Tuesday on Hulu, Octavia E. Butler’s groundbreaking sci-fi novel finally makes its way to the screen.

The story follows Dana (played by WeCrashed’s Mallori Johnson), an aspiring writer who uproots her life and relocates to Los Angeles for a fresh start. But before the young Black woman can settle into her new home, she finds herself being inexplicably yanked back and forth through time, landing at a 19th-century plantation that is intimately connected to her family.

It took more than half a decade for playwright Branden Jacobs-Jenkins — who serves as writer, showrunner and executive producer — to get the show up and running, marking the book’s first on-screen adaption since its 1979 publication.

“It became sort of a Moby Dick for me, this passion project that I chased for years and years and years,” Jacobs-Jenkins tells TVLine. “I always wanted to do service to the novel because you really can’t cram the power of something like this into two hours. It’s really about being with people, watching someone live their entire lives, watching relationships shift and change in such great detail. I just felt like TV is the forum to do that, and that’s what TV does best.”

Because the series is set in 2016, Jacobs-Jenkins made significant changes to update the story for modern audiences. That included giving Dana’s mother, who was only briefly mentioned in the book, a name and a larger presence in the story. 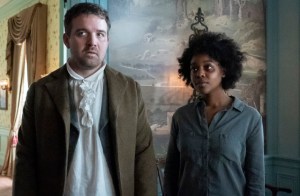 “With Olivia, she is bringing to light intergenerational trauma,” Sheria Irving, who plays Dana’s mother Olivia, explains. “Being torn away from her family [and] reunited with her family, there’s a lot of healing there. And I think he wanted to explore those themes of family, of kin. Who do we call our family? Why are they our family?”

When it comes to altering the story, Jacobs-Jenkins notes that he approached it as a superfan.

“I know that if I were not the person making the show, I would be that person ready to just pounce. That inner critic has always been at war with what I’ve been doing, but I made a choice early on to really try to make sure everything I did had some sort of root or was in the grain of Octavia Butler’s thinking,” the Kindred boss shares, “whether it was in a draft of the novel that I had read or her notes about it.”

As a result, there are “characters in our world [who have] multi-episode arcs who are in the book for only a line or two.  For me, it’s really about expanding on the universe and on the work and really trying to deepen and enrich some of the themes that are already present here.”

Are you looking forward to FX’s Kindred on Hulu?