It was the season’s most brutal blindside and a backstabbing for the Survivor record books.

In Wednesday’s episode, Cody concocted a plan to dupe Karla into not using her immunity idol, all in a ruse to try to vote her out next. But seeing Cody’s masterminding skills strengthen worried his ally Jesse to no end. Afraid of being seen as his right-hand man, Jesse didn’t want Karla’s ousting to boost his friend’s game resume. So he crafted up a plan of his own, using Cody’s own idol against him in order to vote his No. 1 out of the game. (Read a full recap here.)

So how does Cody feel about the betrayal, why on earth did he give his idol back to Jesse and what was the hardest part of the game for him? We asked him all of these and more below.

TVLINE | So how does it feel to be the victim of the season’s best and boldest blindside?
CODY ASSENMACHER | I don’t know yet, man. [Laughs] I’m still processing watching it on TV. It was brutal! There’s no sugarcoating it.

TVLINE | Tell me a bit about your initial reaction to Jesse’s backstab at Tribal that night.
I’ll never forget when Jesse played that idol and came back and fist-bumped Owen. They both kind of laughed and I was like, “Bro, you’re about to get choke-slammed into this fire.” At that point I knew like, “I miscalculated this.” I also thought: You sank both our ships. You just played this idol, you just made a move… you’re out next! It was a numb feeling, you know? I never felt that way before. I never felt that emotion in my body. 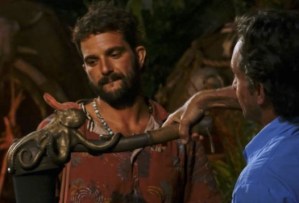 TVLINE | How are you feeling about it now? Any hard feelings toward Jesse?
Nah, man. I’ll be honest with you, we went out and partied last night, and celebrated a hell of a run. Eleven weeks of partying with friends on Wednesdays is a lot! Besides being hungover, I feel relieved. I’ve been an athlete my whole life and having people come up to you and say, “Hey, good luck! I hope you win!”… having that said to you for six months after knowing the outcome, by the end of it you’re just like, “I DIDN’T WIN!” Now that the cat’s out of the bag, the monkey’s off my back, I can get rid of that little bit of anxiety I’ve been carrying that I never have in my typical life.

TVLINE | Now I have a question about this whole idol debacle. We saw you get your idol back from Jesse so you could show it to Karla, but… did you give it back?!
“Debacle” is a good word for it. [Laughs] So I had the idol in my possession and when I had it, I got info from Jesse who said, “Hey, Karla may have Knowledge Is Power,” and that spooked me. I went to Karla and she kept saying to me, “Hey, let’s walk into Tribal with these and show people we’ve got them and pretend that we’re going to use them.” She kept pushing it. The perfect storm. Unknowingly to her, she was then feeding Jesse’s comment. Jesse never really asked for the idol back. He just mentioned [the Knowledge Is Power] a couple times throughout the day and at the end of it I said, “You know what? I’ve been playing the game with this guy for 21 days, or however many days. I’m trying to get Karla out.” It was an easy decision there on who I wanted to trust, and I gave it back to Jesse. That was a debacle, but that was my driving force in giving it back.

TVLINE | Was cutting Jesse ever part of your plan, or were you going to the Final 3 with him no matter what?
No man, that wasn’t part of my plan. After the Nneka vote, I was gutted. My heart couldn’t handle it. I told myself I didn’t want to go through that again. I played this game with emotions and unfortunately, I wasn’t able to make that cutthroat move to get me to the end. 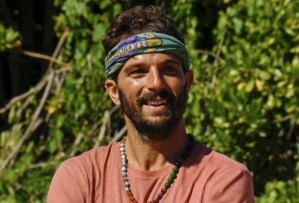 TVLINE | Who else did you want to sit in the Final 3 with?
I wanted to go to the end with Jesse from the very beginning, from Day 1. That was the plan. So Jesse and Gabler would probably be the two that I would’ve enjoyed having a final Tribal Council with. I would’ve enjoyed all of us articulating our games. [But] I would’ve gone to the end with any of those people. I think I had a really good fighting chance to beat any of them in a final Tribal Council conversation.

TVLINE | Your plan to dupe Karla was a brilliant one. Do you think it would have worked had Jesse not gotten in the way?
Absolutely! If you watch the Tribal Council, Jesse plays my idol for Owen and Karla’s like, “Oh s–t! I’ve got to play mine now!” She was in hook, line and sinker. Part of what made this debacle happen as well was I had spent so much time that day talking to her and convincing her that I lost sight of what everyone else was doing. And they were adding another wrinkle in the plan. My hyper-focus on Karla, it worked, but it only worked for one person.

TVLINE | Why was Karla so high on your hit list?
There was a lot of talk amongst the four guys that we wanted to go Cassidy then Karla, or Karla then Cassidy. When Cassidy won that immunity challenge, it was kind of like, “Let’s go Karla,” and a lot of people were going with the flow. Owen and Gabler were on board because they were like, “Oh s–t, we thought it would be one of us!” Karla was the one. She was a good player! She was a threat out there. After we had that previous vote of trying to get Karla to vote for Cass to drive a wedge between them, she swapped her vote at the last minute. It really accentuated that she knew what was going on. She’s a smart player and that’s where her target kind of came from as well. And she won two challenges! She was playing a hell of a game. She was an obvious threat.

TVLINE | What was the hardest aspect of being on Survivor for you?
I think I showed it in my vote out: The emotional connection that you have with people, especially that late in the game. Every relationship is built on experiences, and we are out there for a long time spending uninterrupted time with people, probably more than we spend with our own family. Those relationships are real! We’re doing these challenges, we’re hungry, we’re tired and those experiences add up! For me, the hardest part is definitely the emotional connections. Maybe not for some of the others, but I lead with my heart. 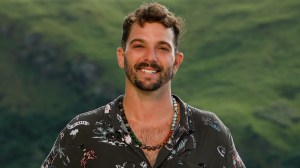 TVLINE | You mentioned how tough the Nneka vote was on you. Why was that so hard and what’s your relationship like with her today?
Nneka and I really connected out there. We had a lot of really good conversations in a short amount of time. I remember the day of that vote was Mother’s Day and I’m a mama’s boy. I picked her a bouquet of flowers and brought them to her, and we talked about her kids and really had that connection. To then turn around and stab her in the back a few hours later was so rough. I told myself I wasn’t going to do it again. Our relationship is good now. We’ve had conversations since. She’s someone I’ll stay in touch with for the rest of my life.

TVLINE | Any final words regarding your Survivor experience?
Get busy livin’ or get busy dyin’, man!