David Krumholtz is a sight for sore eyes by the time he reprises Bernard in Episode 5 of The Santa Clauses. He was last seen in The Santa Clause 2, and the Disney+ sequel series reveals how the beloved elf managed to escape The Escape Clause.

Krumholtz originated the role of Bernard in 1994’s The Santa Clause. He returned for the 2002 follow-up, but sat out 2006’s The Santa Clause 3 — in part because he was committed to CBS’ Numb3rs, and in part because his role had been “devalued.” So when the threequel hit the big screen, Bernard’s former protégé Curtis was head elf, and Bernard received nary a mention. (Rude!)

Sixteen years later, The Santa Clauses gives Bernard stans the closure they deserve. Right off the bat, we’re told that he left the North Pole for Kribble-Krabble, the elf equivalent of Rumspringa, and never came back. “I met someone,” he reveals. “A human. So I made the jump and gave up eternal youth.” 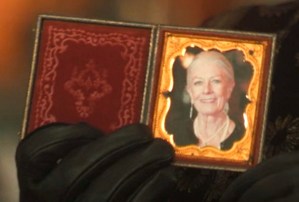 Scott is quick to point out that Redgrave, an Oscar winner for 1977’s Julia, is 85 years young, but the 1,600-year-old elf assures us that their age difference hasn’t impacted their relationship. “We’re several hundred years apart,” he acknowledges, “but we still find things to talk about.” Because love is love, damnit, and that’s all there is to it.

And that, kids, is the story of what happened to Bernard. Satisfied? Perplexed? Some combination of the two? Sound off in Comments.