The Amazing Race has crowned a new set of champions.

At the top of Wednesday’s Season 34 finale, the Final 3 teams — Derek and Claire, Emily and Molly, and Luis and Michelle — start their final leg in Lynchburg, Tenn., a small town just outside of Nashville. As Claire mentions, it’s “the only leg that matters,” and the pressure is on.

At the Jack Daniels distillery, they’re tasked with labeling and packing bottles of booze in order to get their next clue. After some precise sticker-ing, Emily and Molly are first out the door, but Derek and Claire are right behind them, as they both stop at a gas station to ask for directions. 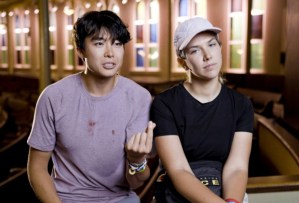 Derek and Claire get to the road block first, which tells them they must climb to the tippy-top of the Korean War Veterans Memorial Bridge to get their next clue. Derek is first to snag the clue and while he’s rappelling down, Michelle fumbles her way… to nowhere. She fails to use the provided rope and instead, attempts to free solo the thing, giving Emily the wiggle room she needs to take second place.

A guitar pick points them to Gibson Garage, and when Derek and Claire arrive, they’re greeted by Season 22 and All-Stars contestants Caroline and Jennifer. They’re told they must deliver three Gibson guitars to musicians located at different venues downtown. Claire apparently doesn’t enjoy running, but with Luis and Michelle right behind, she’d better get to stepping! 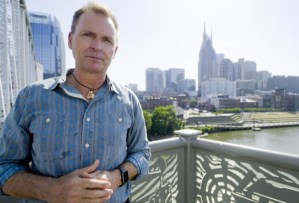 Running with heavy guitars doesn’t help Emily’s injured knee one bit, and Michelle is also feeling the heavy burden of rock ‘n roll. After delivering the instruments, Team Big Brother arrives first to the Municipal Auditorium, where they must use a giant keyboard to arrange photos from their journey in chronological order. Derek’s former piano playing helps them differentiate the keys, but as they’re finalizing the order, Luis and Michelle arrive. To make matters even more complicated, teams only have 11 seconds to hit the keys in the correct order.

Aaaaand then Luis and Michelle come to the absolutely shocking realization that pianos have black keys as well. I… OK, we’re just going to move on here.

Derek and Claire nail the task first, getting their final clue to the PIT STOP — The Ryman auditorium. As they hustle out, Emily and Molly complete the keyboard task and are hot on their trail. But who’s going to make it there first?

After traveling for 23 days in eight countries and 16 cities, it is, indeed, Team Big Brother that finishes first and claims the cash! (Read our Q&A with Derek and Claire here.) Molly and Emily place second, leaving Luis and Michelle in third.

Happy to see Derek and Claire take the win? Grade the finale and season below, then sound off in the comments. (And be sure to come back tomorrow for our Q&A with the winners!)